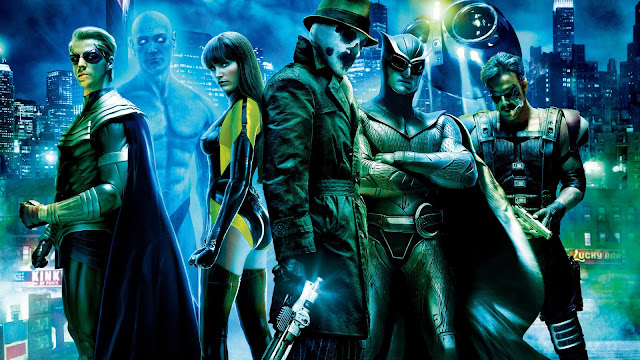 It was during the mid-80's that comic book author, Alan Moore began to think about a world where the comic book characters he had grown up with had shaped the years of the Cold War which could have brought about the end of the humanity. And one has to wonder how morbid Moore's mind really is as it wasn't a good world he imagined. He created characters who, behind the masks and bright costumed were crippled, with uncontrollable impulses, childhood traumas and plenty of redirected neuroses that drove everyone else. But it was Alan Moore and artist Dave Gibbons' graphic novel Watchmen, which helped to revolutionise the types of stories which could be told in the comic book format. Not by just shrouding them in darkness, like many creators have done since, but by weaving them into a dense and deep narrative. It is a detective novel that is played out in an apocalyptic world that would leave Charles Dickens feeling jealous.

But made Watchmen such a popular book amongst comic book communities, doesn't necessarily translate too well to the big screen. What probably didn't help either was the fact that Alan Moore removed his name from the movie franchise. But a Watchmen movie had been trying to get itself off the ground for years and after so many false starts and rumours, it was a little odd that one was finally created. It was directed by Zack Snyder, of 300 fame and he does manage to stay true to the original characters and the look of the original material that was available, while he gives it his own twist and an interesting energy. But that energy can sometimes be misapplied and over cranked as the action can sometimes drown out the characters. When I originally watched Watchmen, I thought it was one of the dulliest movies I had ever seen. Now I am older and watched it again, yes, I think I can still say it is quite dull, but somehow, it is impossible not to get swept along in the narrative of the movie.

Watchmen keeps the alternative 1980s setting that the original book was set in and opens up with the death of The Comedian, played by Jeffery Dean Morgan. The film elects to keep Moore's dark joke that possible re-elections of Nixon could have been one of the world's greatest problems and a masked hero, the only one who didn't hang up his cape when Superheroes were outlawed is Rorschach, played by Jackie Earle Haley. He launches an investigation and finds a conspiracy that appears to be tied to mounting nuclear war tensions between the U.S. and U.S.S.R. as well as a number of his past colleagues. Appearing throughout the movie is Silk Spectre, played by Malin Akerman, her mother and original Silk Spectre, played by Carla Gugino. Nite Owl, played by Patrick Wilson, Ozymandias, played by Matthew Goode. And Doctor Manhattan, played by Billy Crudup.

There is perhaps, too much focus placed on Doctor Manhattan, which often feels like a feat of engineering and an artistic expression. Luckily, his material keeps him grounded and the solid performances from Crudup, Wilson and Haley who all make the film feel like we need to pity, fear and feel sympathy and revulsion at the world the characters inhabit. Unfortunately, Akerman's character is served as a distraction and Snyder doesn't do a good job of beginning with the volume turned up to 11 and then keeping that momentum going. There should have been less time spent building up the action should have been spent instead on building up the book's big Mars set piece and figuring out what would be a better alternate ending than the one dropped in instead of the original's one.

But despite this, the film has an ambitious drive to create an America soaked in dread and terror with its flawed but still recognizable heroes helps carry it to its conclusion. Snyder uses grand pieces to create the sense of impending doom in a previous era but it oddly feels at home in our own era. But Snyder doesn't forget to slow down and show the impact that funerals have or two old friends patching up a broken relationship before the end of the world. So even with the odd misstep here and there, Snyder somehow manages to make this film right and entertaining while reminding us that when we look up to the skies, it often isn't birds or planes that we see, but a mirror of our own society...