Legends of Tomorrow: Season 2 Episode 1 - Out of Time - Review 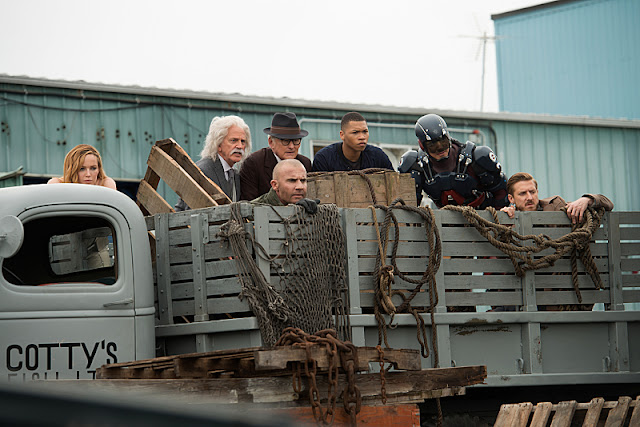 What was perhaps the biggest shame in retrospect concerning the first season of Legends of Tomorrow was how uneven its beginning was, especially when you consider how much it found itself in the end. But despite its unfair and lukewarm ratings the first time around it was granted a second seasons and it allowed the creators to really dig into the band of time-travellers. And from just the first episode, with the lighter tone and the fact that most of the show's dead weight has now been jettisoned, season 2 has shaped up and looks to be a big improvement!

From the word go, the biggest and best thing that really gives the series a push is the fact that the boring Vandal Savage storyline is finally over. And with Savage went Hawkgirl and Hawkman, who, considering the baddies are for the massive crossover story with Legends, Supergirl, The Flash and Arrow are, the pair appear to only be on bit of a gap-year. But their departure has left room for a meaner team to join Rip Hunter on his quest to defeat the timeline now that his former employers, the Time Masters, have been eliminated.

I certainly wouldn't describe Legends as a show that was dark, despite the grim periods it explored Savage's warpath and destruction and the impact it had on the characters. Now the show is freed from all that, the opening episode instantly takes on a more adventurous tone. With no specific mission but an open mandate to protect history by any means, it appears they have to play fast and loose with history in order for them to save it. And there is finally a real sense that the characters are enjoying what they are doing, even if the task requires dressing up like a Musketeer or rescuing Albert Einstein from the Nazis. Arrow has retreated into the darker tone that Season 1 had and The Flash is also dealing with a lot of drama this season, it falls to Legends and Supegirl to fulfil the most charming and fun and DC shows.

But I do have a feeling there will be darker storylines this season but as long as the show continues with this more fun tone, then I don't have a problem. Sara Lance, The White Canary, is still wanting revenge for the death of her sister and Heat Wave is adjusting to life without his partner-in-crime, Captain Cold. But I was pleased to see that the creators now feel more comfortable to sit back and really enjoy the concept of characters travelling through time and causing as many problems as they fix. It has finally gone down the Doctor Who route and allows Sara to flirt with the Queen of France and antagonize the villagers of Salem during the Witch Trials and Professor Stein really geeks out about getting to meet Albert Einstein. On that front, the episode wasn't short in the entertainment value.

And this season also appears to be more eager to build bridges with its sister series'. The overall goal appears to be to incorporate Supergirl into the CW universe and for the Flashpoint effect's storyline to begin rippling outwards. But for now, it isn't clear what effect Flashpoint will have on Legends. But given the show is about time-travel, I assume that the impact on this show will be significant. And the crossover in this episode came from Stephen Amell's Oliver Queen whose appearance helps the Legends get out of their latest problem.

It was nice to see a change of pace for Amell. In Arrow, he spends his time shooting arrows into the villains but here he was forced into the backup role and listen to a bizarre tale of time-travel and displaced heroes. And for all of Oliver's experience with metahumans, magic and the supernatural, he is not equipped to deal with the problems of time-travel. With the massive crossover happening in December, this odd man out quality should work nicely!

And the DC character of Nathan Heywood who is played nicely by Nick Zano. And his family connection that will come into play during the season should be interesting. And while he becomes the hero, Citizen Steel, for now he is a geeky history professor who is a little too excited that he is going to be caught up in the Legend's adventures. Plus, Nick Zano is rather pretty! The clever, nonlinear narrative structure for this episode was another source of charm. And this was helped because the gruff and drunk Heat Wave was the one being the reluctant storyteller. I was a little disappointed that we didn't see more of Rex Tyler, following his last minute appearance at the end of season 1. But from the trailers and the ending of this episode, the show isn't going to wait long in rectifying that little mistake.

And one final thing that leaned on the crossover factor of this episode was making Damien Darhk the villain of the week. Given that the Legion of Doom is going to appear then Darhk's inclusion was needed. The fourth season of Arrow disappointed me for a number of reasons, though Darhk wasn't one of them. It is good to see the character is remaining involved with the Arrow-Verse and being allowed another time to shine. And the show hasn't wasted any time in setting up the Legion of Doom storyline with the revelation that Darhk was working with the Reverse-Flash. It really shows how seriously the creators and the network take these shows so seriously that they are at the point where they introduce major villains from different shows and make them join forces! And while I can see some viewers being disappointed with Legends borrowing villains for other shows rather than using their own, I would take Darhk and the Reverse-Flash over Vandal Savage any day of the week!

But if there was on point that the episode fell short it was how they handled the 'death' of Rip Hunter. There wasn't really a build-up to the final moment and little reason for the viewers to believe that he actually made the final sacrifice. What is more likely is that Rip Hunter has been temporarily moved out of the picture to give the character of Heywood more to do. But I do wish that there had been a more elegant solution to that particular problem.

Every single point of this opening episode point to this being a much stronger season as the show has finally eliminated its lesser characters and taken on a much lighter tone. And with a brilliant use of various guest stars from The Flash and Arrow, everything bodes well for this show as it prepares to delve a lot deeper into the lore of the DC Universe...