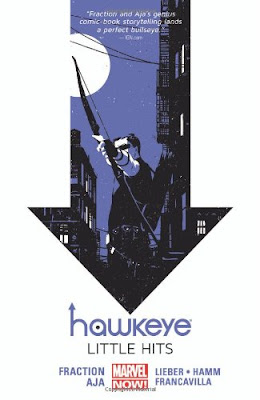 Despite being released in 2013, Hawkeye still feels like no other book that Marvel has put out either in the storytelling or visual design. Little Hits features one issue which is told in the some anachronic style as the previous volume, one issue contains two different stories and four further issues which tell one long story which is finished in the next volume. There are times when each issue feels like it should be read after the one before but there are moments when the writer and artist clearly wanted to take a break between the issues and it can be maddening to figure out the proper pace of this book.

It was a little odd that the previous volume only collected the first five issues of this run. But Little Hits makes it seem sensible as each story from issue 6-11 which feature Clint Barton's neighbour, Grills. Grills is in the centre of nearly every issue in this volume and is an oddball older man who doesn't seem to be all there. His origins are told through issue 7 when we meet his cranky father. Issue 7 was also written in record time as Marvel wanted to raise money for the Hurricane Sandy relief. The devastation in this issues shows how natural disasters on Earth can be more devastating than the alien invasions they fight every other event.

Grills presence reaches its natural end when he is killed off to introduce a new villain, the Clown. The following issue serves as an origin tale for the Clown but it was one of those times I was the author had held off for a while. He is a clown from a circus in an unnamed European country who lost all his loved ones in the war torn environment. The story through issue 7 and 8 is being told to Kate Bishop which means we spend four very decompressed issues in the exact same spot story-wise. Issue 11 moves the story forward slightly. But I find reviewing Little Hits difficult because there is so little story to actually look at.

But for me, what redeems this book is the storytelling flair. Issue 6 was a lot different from other comics I'd read. Given it was a Christmas issue there was a lot of white space. But the artist David Aja uses the space to put small panels in and specially designed titles from Chris Eliopoulos who sets the sparse mood. Some of my favourite images in this book are of the women in Clint's life, Black Widow, Mockingbird and Spider Woman. Aja gives each of them distinctive 60s style bouffant hairdos in a very stylistic touch. Issue ten completely stalls the story in its tracks but I can't fault the art in this issue from Francisco Francavilla.

The triumph of this book is issue 11, told entirely from Clint's dogs' point of view. The story isn't told through speech boxes but a complex set of diagrams in which we see what the dog associates with each person he meets. All the dialogue has been scratched out so we hear the story the way the dog hears it using only words like, dog, help, up and good boy.

Unfortunately this is one book where I can't tell if I'd recommend it. It looks amazing, the art is strong throughout but it is a really frustrating read. Easily the only issue you need to read in this book is issue 11 because it is astonishing to see how Fraction and Aja pulled it off...