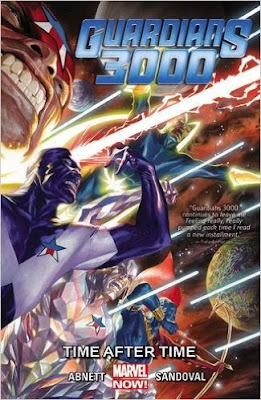 If you're a comic book fan who likes their characters to be making a 'grrr' face in every panel, then this is the book for you! If not, then you might find it a little bit harder to really settle into.
It really did take me a couple of issues to stop noticing these faces and actually start to enjoy the story that was being told and by the end of it, I really did want to find out what happened to these characters.

Author, Dan Abnett has decided to tell us a story where there is something wrong with time. And with the comic originally published in 2015, alongside DC's television series, Legends of Tomorrow, one could wonder if Marvel were trying to jump onto the time travel bandwagon. Time is slipping or skipping and generally doing stupid things and the only person who can sense and see it happening is a human woman called Geena. Apparently in the year 3014, most of the galaxy will have been taken over by a vicious alien race called the Badoon. Geena, trapped in a human labour camp on Earth, is rescued by the original Guardians of the Galaxy, but only because Starhawk told the rest of the team how important she is in saving the universe. So chances are, if she wasn't important, these Guardians would have left her for dead. After being rescued, she is invited to join them and help them to save the universe and she of course says yes.

Starhawk is one of the characters in this book is changed the most by the time shifts. With every time, time changes, the character changes gender, causing confusion for Geena.

But alongside the timey-wimey stuff going on, Guardians 3000 focuses on the Badoon's invasion of the galaxy as they are trying to rescue the universe from them as everything is currently in tatters. The Guardians feel a lot like the Rebel Alliance in this book, they are fighting the good fight but never making any significant headway but this is because time keeps resetting itself, not that the Guardians know that. Well, not until they meet Geena and now they think it is time to fix the time problem first.

These characters feel a bit weird at first, especially for me as I had heard of these characters before but never read any of their stories before. But I guess if you are into real science fiction comic book tale as opposed to straight forward superhero ones, then I suppose you will enjoy this book. It didn't help me that during the first few issues, we are just thrown into the action with the Badoon and expected to know who the hell half of these characters are. Everything just unfortunately feels confusing.

But this volume did do a pretty decent job of introducing us to these characters after the opening issues and explained the majority of the overall plot to me just enough for me to feel comfortable enough to settle into it eventually. While the characters weren't gone into in any great detail, the book certainly gives you the impression that if you stick around, you will get to know them.

The only character to get anything in the way resembling an origin story is the character of Vance Astro, where we learn he volunteered to be frozen like Captain America, (hence the shield he uses), and shot into space in an exploration mission. This was the only way for him to travel through the galaxy as warp speed hadn't been invented when he had originally volunteered for the programme. However, when he is thawed out, we learn that the galaxy has moved on by 500 years and the secret of warp speed had already been cracked which made his entire mission a little redundant. But he quickly learnt that whatever the scientists had done to him 500 years ago had given him some sort of superpowers and he had been made immortal.

The rest of the characters, including the supposed saviour of the universe, Geena, don't really get the same sort of treatment. We get a little insight into their backgrounds mainly from things that they say to each other but again, the tale has been written as if we are supposed to know who the hell they are. And that is the downfall of this book, we are thrown too early into the action with no idea who anyone or anything is and the reader is either left to sink or swim.

Given that this book came out just before the mess called Secret Wars, I assumed that the time travel nonsense was something to do with that. Unfortunately, the book is left on a cliff-hanger and then Marvel saw fit to cancel the title all together, I doubt we will ever now if the team survive their encounter with the Hunger, Galactus, but no matter how difficult I found this book, I would like to find out.

And the covers from artist Alex Ross are gorgeous, so there is one saving grace...