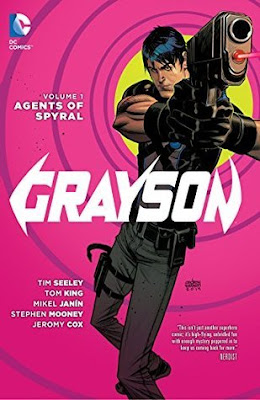 I think it is fairly safe to say that when the reveal was dropped, it was one of the most controversial ideas to come from the New 52 Range. Dick Grayson was to step down from the Nightwing mantle and become a globe trotting spy. But to be perfectly honest, I found myself two issues in wondering what all the fuss was about. Authors, Tim Seeley and Tom King do a good job at making this a better than average book and do a perfectly fine job with Dick Grayson but I must confess to it being a book I didn't fall in love with.

After a while, with the help of a brilliant third issue, I found myself fully engrossed in the unfolding story and ultimately felt that the only problem with Agents of Spyral was that it was over all too quickly.

The first two issues on offer here are good but not ground breaking. The first issues sees Dick squaring off against Midnighter which was a fun few scenes and in the second, Dick and his partner Helena Bertinelli, Huntress, come face to face with a woman who eats people in a story which feels straight from The X-Files. Both Seeley and King do a great job working with the agency Spyral who had been introduced during Batman Incorporated.

The third comics mixes humour, action and sex in a mature way that really explores the world that Grayson know inhabits. It also handles the topic of guns very well. If this were just a spy comic, that topic would be easily dismissible but through the shocking final scenes we can tell that Grayson is something special, it is book with endless power.

And then there is the whole thing of Dick Grayson being a comic book sex symbol. For many years, people and fans have speculated the sexuality of Grayson and while he has sex with a couple of women in this book, in the final issue, there is a subtle hint that maybe Grayson has a thing for Batman! While the question of Dick's sexuality is still left open to interpretation, the writers make sure they include what they believe and it is a testament to how times have changed that DC Comics let this slide past rather than axing the idea, something they would have done in the past.

So, although I initially didn't think too highly of this book, I quickly grew to like it. Its fun, slick and sexy. And while Nightwing might be 'dead', Dick Grayson is still very much alive and kicking serious butt. And who doesn't love Dick Grayson?