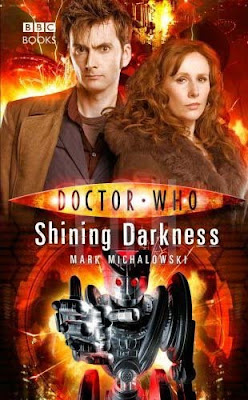 I'm not sure when Shining Darkness is supposed to be set in the television continuity but it doesn't really matter as it is a book which is more than capable of standing on its feet! Author Mark Michalowski had previously written for the Tenth Doctor and Martha Jones with Wetworld. Here he gets a chance to write for Catherine Tate's, Donna Noble, who he captures perfectly.

The Andromeda Galaxy is a long, long way from Earth for Donna but she soon discovers that evil can lurk around every corner. Given that the cover sees her wearing her winter gear from Planet of the Ood, I'm assuming this story takes place right after that adventure.

I really did enjoy this book, which I had a feeling I wasn't going to. There was something about it, possibly the cover that just didn't interest me but because it was Doctor Who and there was the old saying, don't judge a book by its cover, running through my head, I gave it a go. And boy was I glad I did.

The first thing that strikes you is that it is unconventional. It doesn't start like many Who novels and separates the Doctor and Donna in the first chapter and keeps them apart until they are reunited for the final act of the story. Michalowski does a good job of bringing them within touching distance of each other and then pulling them apart again, switching who they are kidnapped by half way through the book.

The book does a great job of giving the issue of prejudice a Doctor Who spin by using robotics in a clever science fiction kind of way and through the eyes of the Doctor and Donna we are allowed to see the issue of prejudice from both sides. In fact, when looking at the connotations behind the novel, I would have to say it is one of the most mature Who novels I have ever read.

There are also some great characters here, in particular, the robot called Mother, who is featured on the cover, who spends the majority of the book silent but strikes up a good rapport with the Doctor but the pair understand each other perfectly.

However, due to the espionage-like way the book is written, the plot and the characters can feel a little confusing at times and while it all clears itself up in the end, it is the ending of the book which lets the novel down slightly because it is so abrupt and flat.