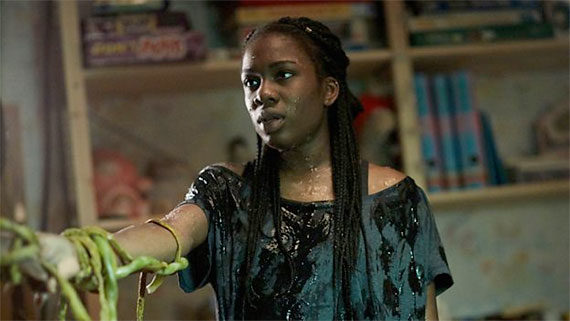 Nightvisiting is beautiful, despite all those gristly alien umbilical cords which are truly horrid. But the story behind it is beautiful, not only in its performances from all the main cast and the treatment of grief.

The story wastes no time in announcing itself as an emotional episode with its dialogue free opening montage that tells us the story of how Tanya's parents met, marrying and raising their family, this is followed by the morning that Jasper's body is carried out of the house by paramedics. The whole sequence is sad, especially for someone like me whose father passed away. But the sequence is essential for the episode and really gives it some emotional gravitas. In fact without it, I don't think the episode would have worked as well as it did.
We cut back to present day, two days after Jasper's death and Tanya is still suffering. But unknown to Tanya, there is a grief sucking race of aliens who have followed the scent of her grief all the way to her bedroom window, much like a shark or predator smelling blood.

The idea of someone wanting to harm you while disguising itself as a lost one is a really cruel but brilliant concept. I really connected with Tanya's character, after all, who couldn't resist the outstretched hand of someone who is gone forever that we've never stopped missing. I like to think that I would have acted much like Tanya when the chips were finally down but what this episode really succeeds in doing is making the audience think, would we act like Tanya and win the battle or would we fall into the hands of the baddie, disguised as a loved one who is no longer with us?

The baddie in this episode is the Lankin. It is a alien that manifests itself in plant-like tendrils and is the series' most science fiction and horror like element yet. Add to that, the need for the victim's to take their loved one's hand and surrounding willingly to their captors is likely to be one of the best ideas that the series will come up with.

This was a tense and cleverly constructed episode. The discomfort that was wrung from the scenes between Tanya's, Vivian Oparah and Jasper's, Kobna Holdbrook-Smith, was brilliant to watch, not in the least because of the sound of Jasper's eerie insectoid blinks. These two actors are definitely the stars of this episode, his manipulation of Tanya and Tanya's growing understanding of the possibility that she might have to give into the urging's of her father to bring her some peace, created real tension and pathos.

The tension throughout the episode fizzles out when Tanya defeats the alien, not only with a plan based on logic but a lucky stab in the dark guess that if the Lankin feed off grief, they can be poisoned by anger. Tanya was the one who turned the lights on the Shadow Kin in the first episode so her resourcefulness has already been established. But she worked much better in bringing the story to its conclusion rather than the first episode where her resourcefulness was nothing more than a plot point.

What makes the show stand out is that Class is more interested in developing the characters emotions rather than the aliens they have to fight. Ram wasn't only battling a skin-peeling dragon in the previous episode but dealing with PTSD after seeing his girlfriend killed in front of him and then getting his leg chopped off in the resulting chaos. Tanya's struggle with her grief and the seductive notion that she could be soothed by being with her dead father and April's story about her dad showed both characters have a remarkable grasp of their own psychology for people so young.

I also liked that Miss Quill got her feelings prodded, not only because of the enjoyable scenes between herself and her sister but from the episode's conclusion. This is where the reaccuring theme of the new Doctor Who series comes in, the loneliness of being the last member of your species. Charlie and Matteusz are in love and April and Ram pair up, all the kids have bonded. This leaves Quill feeling like she is on the outside, looking in. It is clever that the show is tying in the teenage feeling of being left out of friendship groups and putting Quill, a teacher in the same situation that so many youngsters find themselves in.

And can we talk about how damn cute Charlie and Matteusz are? With the feeling of love being so close to surface in this story, through Charlie and Matteusz we are told that even our parents can't always give us the feeling of love that we deserve. Their feelings of abandonment, literally in Matteusz's case as his religious parents kick him out, mirror Tanya's feelings. She feels like she has been abandoned by her father when he died. This episode of Class teaches teenagers an important story, parents don't always give us the love we deserve, they can be distant, intolerant, abusive and absent.

What was delightful though was when Charlie told Matteusz, his boyfriend, in their romantic, tender and unfortunately rare depiction of young love in television these days, if your family isn't right then you should feel free to chose another. And it is these messages that Class loves to give its audiences is what I'm sure will make it surpass its parent show, Doctor Who...