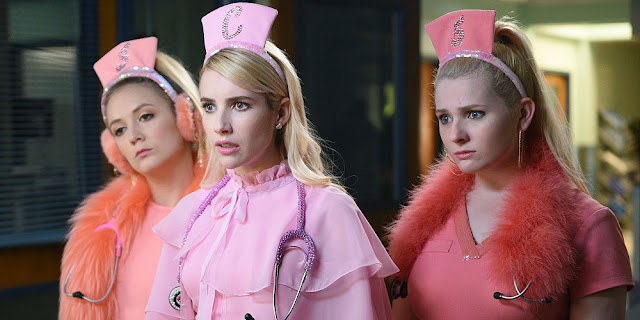 Listen up! There is something on the loose at C.U.R.E. Hospital that looks like a ginormous horned plant which decapitated Werewolf girl in a hydrotherapy tank before smearing swamp slime down the hallway. Well, that's the story that Chanel #3 tells us.

There is something really disturbing going on at C.U.R.E. and as of the moment, it isn't medical malpractice. But it doesn't help that Munsch was Skyping and worrying about her WIFI while heads were rolling and a detective was pointing her torch at #3 as she is now a murder suspect and a deluded piece of cotton candy!

I got really excited in this episode when the Red Devil made another appearance! It was like the good old times at the University in the previous series. Even Chanel, played by Emma Roberts, seemed excited by it. I also liked that Chad Radwell pulls his mask off to announce that he is back. But there is bad news, he wants to be a doctor. But how much hope can there be for someone like Chad who spends most of this episode engaging in impromptu hot body contests with Dr. Holt in the showers, trying to find a way to get Chanel back?

Another blast from the past comes from Hester who makes her debut in this season. She clearly knows what is going on and knows things that could affect the green monster investigation but she is only willing to tell everyone what she knows if she is released from the maximum security prison basement she now lives in. That whole scene was so fun to watch, with elements clearly taken right out of Silence of the Lambs and it was funny to see Hester doing her own Anthony Hopkins impression.

But the best highlight from this episode comes in the shape of someone with a disease which can only be described as Toad Syndrome. Colton Haynes stars as Tyler, a boy whose skin is crawling with tumours that make him look like Freddie Krueger because it seems he is covered in infected bubble wrap. Chanel #3 is boyfriend starved and catches a glimpse of him before he contracted the disease. She decides to launch a smartphone filmed TV campaign in a hopes people will feel bad and will give them money to buy a machine that will help Tyler get better. But, Tyler doesn't get the machine used on him in a way that he would have hoped because the monster quickly gets his hands on it and kills the boy with it in a not-supposed-to-be-funny scene featuring Haynes' screams mixed with those from the Bonnie Tyler song, Holding out for a Hero, which plays over the scene.

But the episode makes it pretty clear that it isn't just the patients who are going to die, Dean Munsch is slowly becoming a disease. She reveals this to us after Zayday confronts her about the killings and accuses her of being the murderer. But Munsch opening the hospital had nothing to do with her newfound feminism or a desire to cure the in-curable because the only life she is trying to save is her own.

Munsch's fateful disease is contracted from eating human brains and apparently, that isn't exclusive just to zombies. We see her eat a suspicious dessert, brains, at a party in Papua New Guinea. But she later remembers that the party was a funeral, unfortunately, a cannibal funeral. This is why you should never eat something unless you know what it is first.

And zombie body parts are used to explain why Dr. Holt has a hand that doesn't originally belong to him and why that hand is able to snatch scalpels and Twizzlers from people behind him in a cinema. The hand had formally belonged to a squash player who turned into a serial killer who felt he was a one handed magician with a knife. But it leaves the rest of the series for us to see if his insanity was passed on psychopathically or from beyond the grave.

While all the clues point to Dr. Mike, yes I think this is a reference to the famous Instagram star with the same name, we learn that he was stabbed and killed one Halloween after he had dumped a body into a swamp which we saw in the previous episode. I've begun to suspect Nurse Hoffle who certainly appears to be up to something. But if this series is as good as the first then it will keep you guessing right up until the final moments!

A marked improvement on the first episode, the humour, while still not as good as it was in the first season, is finally there. A story which seemed like it was going to be boring in the first episode is explored a bit more deeply and overall, the episode made me want to know what is going to happen next. This is Scream Queens back to its camp self. And its about time...