Doctor Who: The Roundheads - Novel Review 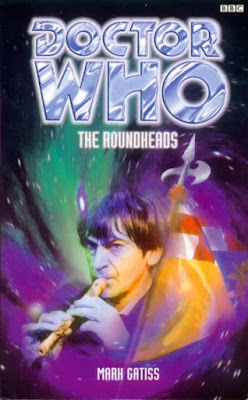 The English Civil War has only just ended when the TARDIS brings, The Second Doctor, Ben, Polly and Jamie to a quiet London backstreet. But they are all quickly embroiled against their wills in the politics surrounding the imprisonment and trial of King Charles. And something sinister is unravelling in the background, something that never made it into the history books and something that forces the Doctor to make sure history stays on the right tracks.

The Second Doctor played by Patrick Troughton is arguably the most difficult of all the incarnations to be characterised in print but author Mark Gatiss proves once more, how much he loves and understands the show by giving us a spot on interpretation of the Second Doctor. Here, the Doctor is frequently funny, especially when he gets lost inside his own TARDIS. He loves the snow and claps his hands together with glee when he sees the Roundheads. And he gets put into plenty of awkward situations and has to pretend Jamie has second sight to save their lives. It was also a nice little touch on Gatiss's part to mention that the Doctor was taught hypnosis by the Master. What you don't realise as you are reading this novel is that the Doctor spends most of his time being incarcerated. But it works, the words sound like they came from Patrick Troughton himself as he flips from mischievous charm to utter seriousness at the drop of a hat. It's really brilliant.

Throughout the novel there are a few sly little digs at the fact that companions Ben and Polly are no longer needed and they get one more stunning moment at the end of the novel which presumably takes place right before their final adventure, The Faceless Ones. Meanwhile, The Doctor and Jamie get a lot of time to strike out on their own and prove why they were such a good team and double act. There is also a nice little hint at the supposed tension behind the scenes with Ben digging into Jamie that he is still new to this time travelling and he is naïve to everything. But it is nice that during this novel, Jamie starts to think of the TARDIS as his home and the Doctor, Ben and Polly, his family.

Ben wasn't a companion who was well served on the television series or in other media, though his recent appearances in the Big Finish audio range have been brilliant. But The Roundheads proves what an asset he and Polly were and should have been. He is well served as booze gets the better of him and he drunkenly shouts out that the king is going have his head chopped off. Then, his Navy training days come in handy when he is pressganged into working on two ships and heads of, against his will, for Amsterdam. First, he works for the sinister Captain Stanislaus and then for the brilliant and funny Captain Winter, who he strikes up a nice rapport with. Ben obviously had wished he could have been a pirate and here he gets the chance, especially when the two captains battle each other and getting in a booze up in Amsterdam. He flirts with girls and becomes embroiled with Winter who is trying to find out what the mysterious package Stanislaus had to collect to take back to London. His relationship with Winter is nice to read and the pair become so close that he tracks down her killer at the end of the novel. While it is Prince Rupert who shoots her but it is Stanislaus who is dispatched for her. He gets a rather scary moment when he gets stuck in quicksand up to his waist and thinks he is going to die. It is nice to see how down to Earth he is and makes it sadder that he hasn't had more material.

Gatiss also gives Polly a lot to do, another companion who wasn't served well, in my opinion, on the television and one classified as a dolly bird. It was an unfortunate stereotype as Anneke Wills did such a great job. In fact, Polly is one of my favourite companions! Here, she is enchanted by a man called Christopher Whyte but devastated in the final chapters when she has to follow him and reveal where he helping the King to hide in order to keep history on track. She also strikes up a warm and friendly relationship with Frances Kemp but manages to make a bad situation even worse when she winds up aiding the escape of the King. But she realises she has been tricked into doing it and there is a brilliant scene where she has to flirt with the guards outside the Kings cell.

The whole of this book is colourfully written with Gatiss blowing the works of Christopher Bulis and Gary Russell out of the water. Gatiss wastes no time in having Ben and Polly attacked and separated while there are some pages that depict a bloody battle in wonderfully vivid prose. The Doctor makes a mistake in dropping his book on the Civil War, only for it to be picked up by Oliver Cromwell's son, Richard who is horrified at how the future will unfold and how he will be remembered through history as someone who was daft. Then there is the whole revelation about how just by being there, the Doctor and his friends threaten to change history, which is what of course happens.

I have always been a sucker for the pure historical stories from Doctor Who but The Roundheads, while rooted in historical fact, manipulates history. The King never did escape from Cromwell, to my knowledge. And the book ends on the King having his head chopped off, showing that history had been put on the right track. Gatiss neatly manages to get around the whole history changing by having Cromwell saying there will be no mention of this anywhere. The Doctor and his companions are all reunited with the TARDIS and the plot points are all neatly wrapped up.

What is brilliant about The Roundheads is that it slots in perfectly with the era it is set in. Gatiss captures the characters perfectly, taking what made them brilliant and playing with them while giving them room to expand and develop. Gatiss selects a great time in history that was never really touched upon on the television series and gives us enough political intrigue and conspiracy theories to keep everyone happy! For me, this is easily Gatiss' strongest piece of Doctor Who fiction and is highly enjoyable!