Class: Series 1 Episode 1 - For Tonight We Might Die - Review 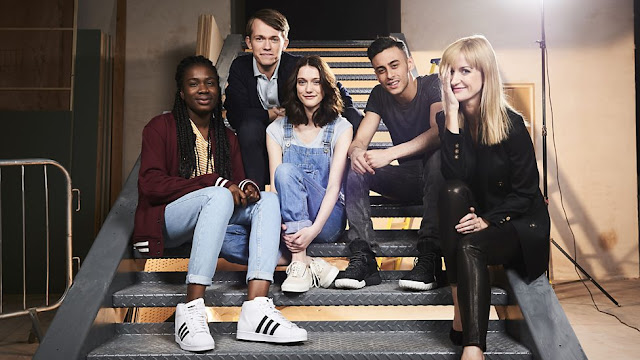 Coming from the Doctor Who universe, the opening shot lets us know this is show connected with the overall franchise. Someone is running down a corridor, a staple of Doctor Who, I don't think there is an episode where someone doesn't run down a corridor! With this nod to its parent show, we know right away that we are going to be watching something compelling and engaging. We know it is going to be a hell of a lot of fun and we are going on an adventure. But then the titles kick in with it's catchy song and we know that although it is connected with Doctor Who, Class is a show in its own right and it knows how to stand on its own two feet.

Picking right up from the titles, director Ed Bazalgette introduces us to a large number of the main cast in a long sequence which allows us to meet each of the main characters. And there is something really nice about this sequence, none of the characters know each other yet and don't like one another, but it is effective because we, the audience, know they are going to be friends, even if the characters don't yet.

And through the pilot we get a great sense of each of the characters. And For Tonight We Might Die, is an effective pilot episode to kick the series off because it quickly establishes the core characters and makes them endearing for the audience. This creates a pathway for some great stories to be told down the line as each of the cast gets their own character arc teased. For example, watching Ram, played by Fady Elsayad, deal with the trauma he endures through this episode will make for compelling drama. But each character is fantastic which is why I'm not going to single out one character in particular. As a fan of shows like Vampire Diaries and Buffy, I know that there can sometimes be a justifiable worry that the acting is going to be subpar and I would be lying if I thought that I had maybe hyped the series up too much and I was going to come away disappointed. But that wasn't the case, I was thoroughly entertained watching Greg Austin, Sophie Hopkins, Vivian Oparah and Fady Elsayad, all of whom do a really terrific job.

Katherine Kelly is simply superb. Her character, Miss. Quill, impressed me throughout the episode, as she tells us several comments and questions that will no doubt be explored throughout the series. And what I really liked was that it wasn't made entirely clear if she was going to be a goodie, as the story behind her punishment does throw up a few barriers and warnings about her. Is this a character we can trust? And what I really, really liked was that she was basically a slave to Charlie, played by Greg Austin, which also makes us wonder how good his character actually is. The dynamics between these two characters is fantastic and this alone has the power to push the series forward.

And what really helps the fantastic acting, is the equally fantastic writing from Patrick Ness. Over the years, he has received much critical acclaim for his work as a novelist for Young Adults. Here he manages to set the whole world that these characters live in, in a matter of moments. His creations, The Shadow Kin, have an excellent premise and there is a great hook at the end of the episode featuring the mysterious Cabinet of Souls. For Tonight We Might Die does a superb job of mixing action and comedy with drama and tragedy and there is just something about Class that makes is so clear that this is going to be one of the most powerful television shows out there.

However, I have to admit that there were certain aspects of this episode, particularly the conclusion that felt a little rushed. After spending the best part of forty minutes setting up The Shadow Kin, their defeat was a little rushed and felt like it needed just a little more time dedicated to them. But there is a nice little joke from Tanya, played by Vivian Oparah and a brilliant writing choice from Ness in tying the life of The Shadow Kin's King with April's, helping to emphasize her character's sense and feel of frailty. And the Kin bear a personal grudge with Charlie and Miss. Quill which will no doubt be explored throughout the series.

And it was nice to Peter Capaldi appear as the Doctor almost as though his appearance was a blessing from the parent show, wishing Class the best of luck. It helps to establish Class in the Doctor Who universe and allows us to have one final moment of Clara, when the Doctor sees her name on the Coal Hill board of remembrance, right underneath Danny Pink. But did anyone else notice Susan, the Doctor's granddaughter mentioned on the board under Foreman. S. Oh and the Barbara Wright Building sign posts. Oh my god, I was so pleased that the original companions were referenced. Does this mean we might get a little cameo appearance or mention of Ian Chesterton, god I hope so! But anyway, back to Capaldi. While it is nice to see him again, it was also nice that he wasn't an inimical part of the plot. And that felt right, it is made clear from the beginning that this isn't Doctor Who. Class is something new and it is really exciting!

Class debuts with an excellent pilot episode and introduces us to a compelling cast and an interesting plot, doing what every fantastic pilot episode should do. But most importantly, it shows us that is one programme that is going to stand on its own two feet and one that could, quite possibly, surpass Doctor Who itself...