Doctor Who: The Time Warrior Review 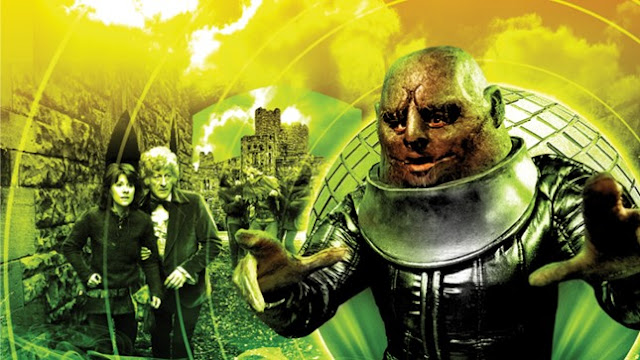 Considering that Doctor Who was a show about time travel, the show hadn't taken a trip into the past since 1967's Evil of the Daleks. This was primarily because the historical shows weren't as popular as the more sciencey Who stories so they were quickly weeded out.
The Time Warrior was first broadcast in 1974 and it was the first pseudohistorical story since The Time Meddler. Author, Robert Holmes, demonstrates just how well pseudohistorical stories can work with his brilliant story set in the middle ages, full of lively dialogue and humour and it came with a memorable villain, Linx, the first Sontaran that we ever see. And it also introduces the Doctor to his new feisty companion, journalist, Sarah Jane Smith, played with endless charm by Elisabeth Sladen.

Jon Pertwee's first appeared as the Third Doctor in 1970. The Time Warrior was the story which commenced his final series in the title role. Between Spearhead from Space and The Time Warrior a lot had happened, the sort of events that shaped the show and are still mentioned to this day. The stories were set primarily on Earth and saw the Doctor protecting the planet against all manner of alien menaces with the help of UNIT. The end of The Three Doctors saw the Doctor regain the ability to travel through time and visit other worlds. But his remaining with UNIT was purely voluntary though those stories gradually faded away. In this story, UNIT is used in a perfunctory way to help establish the plot, they disappear half way through episode 1 but the story of how the Doctor gets to where he is going is a little contrived. Surely it would have been better to have the Doctor being called to investigate rather than simply being where the kidnappings are happening? But I suppose it helps give the Doctor and Sarah Jane a good enough reason to join the action taking place in the 12th Century. 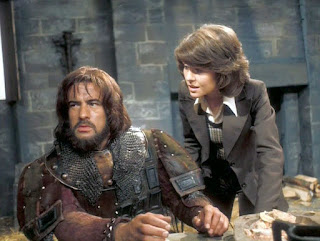 By the time that the Doctor and Sarah arrive, the audience have already met the two baddies. David Daker is the drunken and brutish robber knight, Irongron while Kevin Lindsay is the potato headed Linx. The Sontaran ship crashes near to Irongron's castle and Linx proposes a deal. He uses the castle dungeons as a safe base to repair his ship and in exchange, Linx will give Irongron projectile weapons a few centuries early so that he can defeat his enemies. It is interesting that neither trust each other and their alliance is built more out of a warriors respect than anything else. Holmes successfully gets a lot of dramatic mileage out of the uneasy partnership and comic mileage too.
One of the pleasures of this story is seeing Linx seethe as he tries to deal with the idiotic Irongron and his even thicker underling, Bloodaxe. Irongron gets a good few insults off in Linx's direction calling him 'Toad Face' and 'A Broody Old Hen'. He even insults the Doctor calling him 'A Long Shanked Rascal With A Mighty Nose.' Daker is particularly good as Irongron capturing his arrogance and brutishness making him a believable threat but there is something about the character that makes you laugh at his stupidity. 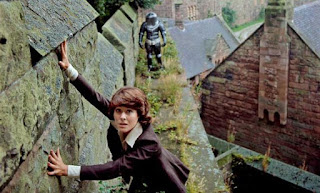 Linx comes across as a more restrained and subtle villain despite his outwards appearance. He is patient, intelligent and acts with a code of honour even though it is built on military pragmatism. The Sontarans quickly became one of the show's most popular monsters, appearing another three times in the classic series and several times in the new series. And even though there is only ever one Sontaran in this adventure, pretty much everything that made them appealing baddies is on offer here in their first appearance. What makes Linx stand out is that his motivation isn't as melodramatic as other monsters. All he wants to do is fix his ship and not rule the planet or blow up the planet. He is one of those villains that we can relate too. He just wants to fix his motor and be on his way. He does give Irongron weaponry that won't be invented for another few centuries, yes it might alter history but it appears to be nothing more than an amusing secondary outcome to Linx. He doesn't care about the Earth, he just wants to get back to his beloved war.

This story also plays well to both of the major aspects of Jon Pertwee's incarnation of the Doctor. The Victorian gentleman and the action hero. Helping humans without the technology to defend themselves against alien aggressors in the middle ages is exactly what the Doctor has been doing with UNIT, just eight hundred years earlier! And his escape from a rabble of swordsmen by chandelier is an added bonus!

It is a bit of a shame that UNIT don't get much to do here. Particularly as Linx and Irongron's relationship, an alien and a stick in the mud soldier, is a clear parody of the Doctor's relationship with the Brigadier. I would have loved to have seen the Brigadier get a chance to travel back to the middle ages with the Doctor and Sarah. Without the Brig's attendance, this story leaves one avenue sadly unexplored.

It is good that Sarah Jane, the friendly face for the seventies feminism gets to give Irongron and Linx a piece of her mind at various points throughout the story. Irongron sees her as little more than servant class while Linx sees the XX chromosome as an antiquated quirk. Her appearance in medieval times leads the story to deliver one of the best lines in the whole series. Sarah stands up to a kitchen maid who is obviously happy with her servant status. She realises that her seventies beliefs about where women were aren't metaphorical anymore when she delivers the line, "Your still living in the middle ages!" 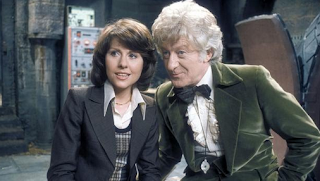 It is a testament to Pertwee and Sladen that their first scene together works so well. The Third Doctor was an odd mixture of rebel and authoritarian figure. So it makes perfect sense that he should see right through Sarah's attempt to fake her way into the science centre using false credentials. He admires her for doing it, especially since she is motivated by nothing more than curiosity. He teases her about making coffee but makes it clear enough to her that he is only joking. It is a play on Holmes' part to highlight the character of the Doctor as someone who is in favour of women's lib and is comfortable enough in his masculinity to make himself his own coffee. And the story delightfully wastes no time in showing Sarah as a capable woman.

But what is really odd is that the show had taken such a long time to come up with a character like Sarah Jane. I have no doubt in my mind that had original producer Verity Lambert stayed on, we would have been given a character like Sarah much sooner. Sarah Jane is obviously based on Lois Lane who uses nothing more than her wits wherever she ends up. I love how when Sarah first arrives at the medieval castle it doesn't dawn on her that she has travelled through time, she goes through a whole list of things before suggesting that it is a film set. She also jumps to conclusions about the Doctor being behind everything that is going on but it makes complete sense that she would think that, anyone would. And Sarah is still vulnerable enough to need rescuing sometimes and that's okay. Like Lois Lane, she can get herself into trouble and often can get herself out it without screaming for the Doctor. Throughout this adventure you can see why the Doctor and Sarah get on so well and why they decide to travel together, they are both adventurous and curious about everything that is going on.
It is little wonder that for many, Sarah Jane is the quintessential Doctor Who companion. It is just surprising that the show took eleven years to come up with her.