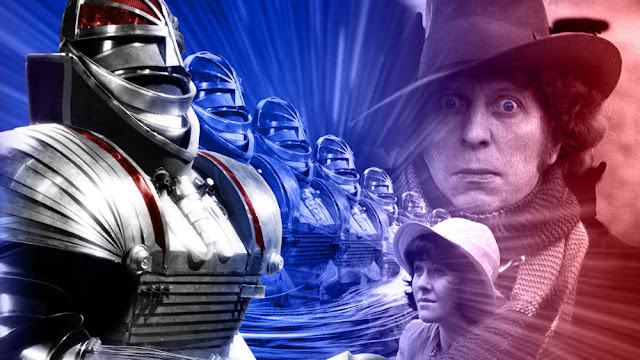 Following on from exactly the moment that Planet of the Spiders finished, Robot picks up Jon Pertwee's regeneration and we witness once more, his transformation into Tom Baker, the Doctor's Fourth incarnation. But he has little time to settle into his new body and recover his wits as he is tasked with investigating a series of mysterious burglaries of top secret plans and equipment which left UNIT and the Brigadier dumfounded. 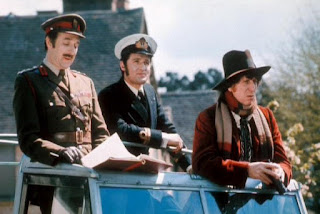 All the clues point to an underground conspiracy which is hell bent on seizing all control of the world's nuclear arsenal and holding the entire world to ransom. UNIT finds itself needing the help of the new Doctor to thwart the efforts of a secret group called The Think Tank.
Will the Doctor be sharp enough to stop a powerful super-robot that takes a rather unhealthy interesting in his companion, Sarah Jane Smith?

Written by Terrance Dicks, Robot, blends obvious references to classic movies, Frankenstein and King Kong with the trappings of a Pertwee UNIT adventure. It is an awkward but pleasing enough tale that never quite gels properly but features some nice performances, good dialogue and the delightful debut of Tom Baker as the Fourth Doctor.

The success of this story is all down to Baker. In only his first appearance, he brings all the eccentricities and the larger than life persona that made the role his one and an instant hit. It was obvious right away that Baker was the right choice for the role he seemed to be born to play and is little wonder why he became one of the most popular, if not the most popular, incarnation of the Time Lord. 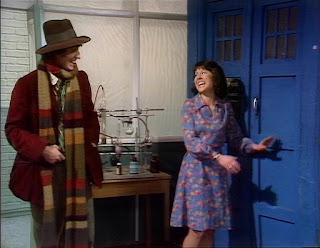 Hindsight is a wonderful thing. With hindsight we can see that the Fourth Doctor seems completely out of place in a present day UNIT adventure. From their first meeting this new Doctor and Brigadier's relationship is different and will never be the same again. This story was designed to introduce the new Doctor to an audience who had been used to Jon Pertwee's five years of television so the producers obviously used familiar surroundings to ease these viewers into the world of the new Doctor. And that's alright because for a first story, it totally works.
But there is something about seeing the Fourth Doctor working with UNIT and riding in Bessie that doesn't feel right. It feels a lot like watching a caged animal pacing up and down waiting for a chance to be free. Luckily for us, this caged animal gets to be freed in his very next story which would see the Doctor out among the stars, where he belongs. 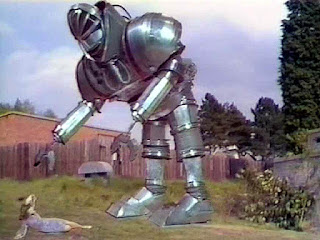 The main failing of this tale is the sadly below-par visual effects. Even though at the time, these were considered brilliant by 1970s standards, they haven't aged well. And despite the ambitious scope, this story fails to provide a suitably epic conclusion with the all-too-obviously chroma-key Robot and rag doll Sarah Jane. The thing that stands out the most though is the little Action Man tank that makes an appearance at the end of episode 3, the producers made a real mistake sticking it in the foreground, making it so obvious that it was nothing more than a child's toy and no amount of sound effect is going to cover it up.
So it is a good job then that Doctor Who has always been about the viewers connection to the characters and stories that are being told rather than the iffy effects on display here!

Robot does have some nice moments, like the Doctor's brilliantly sympathetic interrogation of Professor Kettlewell and Sarah's heartfelt concern for the giant robot, which is an obvious homage to the relationship between King Kong and the lady he befriends.

So while Robot will never be considered a classic, it is a damn good introduction to a new Doctor whose potential was evident from the word go. And for those elements alone, Robot is worth a place in Doctor Who history...