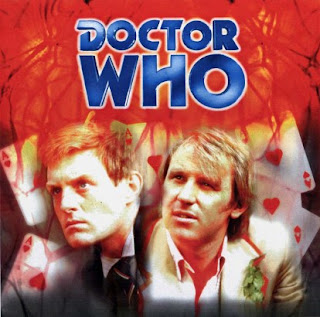 Author Mark Gattiss is well known amongst the Doctor Who circle for his excellent contributions to the show. Following his contributions to the novel range, out of which I recommend, The Roundheads and Last of the Gaderene, Phantasmagoria was his first time writing a Doctor Who audio drama. And something I didn't pick up on until recently is that during his television adventure, The Unquiet Dead, Charles Dickens asks, "What Phantasmagoria is this?" Now I know this was a cute little nod to this story, which sees a number of strange things in London in 1702.

Phantasmagoria features the Fifth Doctor, played by Peter Davison and his companion, Turlough, played by Mark Strickson and takes place at some point between the adventures, Resurrection of the Daleks which saw the departure of Tegan and Planet of Fire which was to be Turlough's swansong. Personally, I never understood why the production team during 1983/84, developed Turlough a lot more. He is certainly the most unique of companions as he joined the TARDIS when he was in league with villain, The Black Guardian on a mission to kill the Doctor. I suspect, the writers found it too difficult to explain properly why he did this but it is odd how between the events in Enlightenment and The King's Demons, everyone seems to have forgotten what he had tried to do.

Of course nowadays, thanks to Big Finish, we had a whole host of adventures featuring the Fifth Doctor, Tegan, Turlough and an older Nyssa to explain this away. But Turlough came across as quite a bland companion after that on television and his darker nature was never really explored again except in the way he only thought of saving his own skin.

Taking place in 1702, the story oozes atmosphere and the performances from all around are terrific throughout. The endless banter in the Diablo club between members, Flowers, Cartaret and Jeake, who is played by Gattiss is wonderful to listen to because for me, it harkens back to the talks between Jago and Litefoot. The first lines from Sir Nikolas Valentine drip with menace and leaves little doubt to the listener who the villain is.

Gattiss also does a good job of introducing a series of seemingly unconnected plot threads. Young men are pursued or killed by phantoms. A mysterious highwayman, Major Billy Lovemore is robbing people in the streets. Dr Holywell appears to be in communion with the dead. There are a couple of aliens who are discussing a strange client who is hunting someone or something. And somehow, Gattiss brings all these elements together in a nice way with a good twist for effect. And the Doctor performs some nice trickery to save the day.

But it is the atmosphere that really makes this story come together. Nicholas Brigg's excellent direction helps this story to rattle along at a real pace and there are some brilliant performances from the guest actors Unfortunately, Turlough doesn't get a lot to do here except for running around and trying to save his own neck. But it is nice to hear Mark Strickson is still playing the character and is an enjoyable first adventure that bridges the gap between Resurrection of the Daleks and Planet of Fire. And Peter Davison is obviously relishing the chance to play the Doctor again. After the dim first audio adventure, The Sirens of Time, Phantasmagoria is easily Big Finish's first triumph!