Doctor Who: Keeping Up With The Joneses - Review 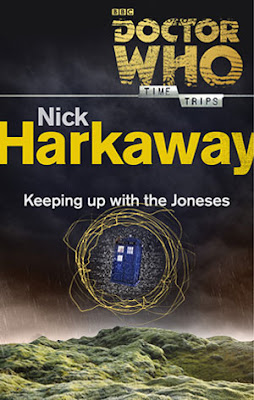 If you didn't understand the saying, 'Keeping up with the Joneses' like me, then you probably though that this story would feature the Tenth Doctor, played by David Tennant, going back to catch up with his medical student companion, Martha Jones. I would later find out that the saying means, try and maintain the same social and mater standards as one's friends and neighbours. So nothing to do with Martha Jones at all.

Instead, Keeping up with the Joneses, sees the action taking place in a quite Welsh town called Jonestown. The Doctor arrives and begins to go by the name of John Jones. Everyone in the town has the same surname of Jones, which means they are either all inbred or something is seriously wrong. The weak link in the strange town comes from none other than Lady Christina De Suoza who was last seen in Planet of the Dead. Christina once more becomes the Doctor companion as he tries to find out what is going on. She asks all the necessary exposition questions but isn't really a companion in the conventional sense. I won't spoil some of the revelations that come later on in the book but you will be in for a treat.

One would expect that this book would stick to the normal conventions of a Doctor Who tale and begin with the TARDIS landing in Jonestown, instead, the TARDIS lands on Jonestown. And it happens when the Doctor is brushing his teeth which leads to us getting a funny little description about how the Doctor doesn't really need to brush his teeth as his biology doesn't allow the sort of decay that happens when you don't do that but he likes the sensation! But because the TARDIS lands on Jonestown, it becomes like the TARDIS with the Doctor and Christina opening doors only to find themselves in rooms which weren't there before.

Actually having the TARDIS spreading itself across the entirety of Jonestown is an ingenious idea and one that had never been done before. And like every good Doctor Who story, it needs a credible villain, this time that comes in the form of a giant storm that follows the Doctor and Christina wherever they go. And while it isn't the greatest villain ever written for a Doctor Who story, it does give our characters something to interact with.

Author, Nick Harkaway had a clear vision when he set out writing this story which is obvious from the very beginning and he tackles the exploration of the Tenth Doctor as a character. This isn't the Time Lord Victorious we saw in Waters of Mars, this is the fun, life loving character who grabs peoples hands as they run and shouts, "Allons-y!" From how he speaks to how he runs his hand through his hair, Harkaway nails the characterisation of the Tenth Doctor who practically jumps off the page in every scene he is in.

But, Keeping up with the Joneses, isn't without its faults as occasionally, the whole thing gets rather too confusing putting a few of the Stephen Moffat scripts to shame! And for a story which feels like it should come across beautifully on paper, it does get muddled in places. However, this story is a perfectly quirky story that is bound to keep your attention throughout. And if it gets a little too confusing or bewildering then don't worry, there is plenty of fun moments and fun gags that were a staple in the Tennant era to keep you happy.