Doctor Who: The First Sontarans Review 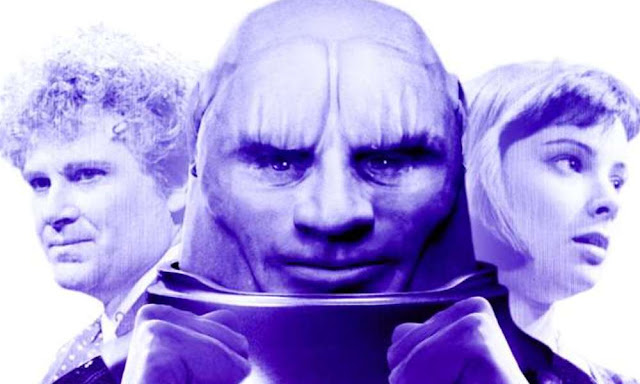 The Lost Stories audio range at Big Finish eventually got good with the First, Second, Fourth and Fifth Doctor releases but the range didn't get off to the strongest of starts with the first season re-telling the stories, from the cancelled Colin Baker season. The only one I particularly liked was Leviathan. So it was with some trepidation that I came to the remaining lost Baker stories. The last three in the range all featured some elements from previous stories in the series.

I haven't listened to the other two Colin Baker stories that surround this one but I did think that The First Sontarans was actually pretty good all things considered. The story was the first Big Finish audio adventure to be written by Andrew Smith who had previously written the television adventure Full Circle in 1980 and seeing the Doctor and Peri coming face to face with the first Sontarans. But it isn't a Genesis of the Sontarans, kind of story. Instead, it sees the Sixth Doctor and Peri coming across a homing beacon on the moon in 1872, which also happens to be the year the Marie Celeste vanished. Life in a quiet English village quickly becomes anything but quiet and there is soon shooting and Sontarans and shouting and lots of brilliant Doctor Who stuff going on.

It is quite good. While I doubt that The First Sontarans would ever top any polls, it is a solid Doctor Who story that does all things Doctor Who should do. And after a couple of scenes which set the story up at the beginning, the rest of it zips along at a real pace. The surprises are well done and there a couple of revelations here and there as the backstory is gradually revealed.

There are also some brilliant performances, Colin Baker as the Sixth Doctor and Nicola Bryant as his companion Peri, getting a lot do. Surprisingly, Peri gets an awful lot to do here but you wonder if it would have been the same during her television adventures in the 1980s or if she would have stood around showing cleavage. And we get some good performances from the Sontarans, voiced by John Banks and Dan Starkey, the man who plays the clones on television. For the most part, the majority of the guest performances are all strong here.

But the definite highlight is Anthony Howell as the friendly local innkeeper, Jacob. Howell does a great job of playing a surprisingly complicated character who, although described as nice in the CD extras, has done some things which are less than nice and from the backstory we are given, it is perfectly plausible. The emotional subplot surrounding Jacob is well written and handled and we get some great scenes between Howell and Baker which are a joy to listen too.

And credit needs to be given to Jamie Robertson for his strong sound design and he deserves particular praise for the militaristic theme he gives to the Sontarans!

While The First Sontarans does scratch a continuity itch, unlike other stories which have done this, it doesn't feel pointless or silly. And with a story like this on offer, I might be tempted to try the other Colin Baker Lost Stories which are on offer...