Doctor Who: The Death Pit - Review 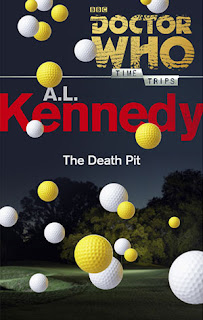 It takes someone who can really write to kick of a new range of Doctor Who novels. In 2013, it fell to little know author A.L. Kennedy to do just this, kicking off the Time Trips E-Book range of short stories with The Death Pit, featuring Tom Baker's Fourth Doctor. And, rather unpredictably, she has elected not to include a companion for him since she believes that none of the companions were actually interesting after Sarah Jane Smith. Thus, she stumbles across one of the problems with the show, it needs a companion. Luckily though, Kennedy manages to justify her decision well enough in the end as the book is a celebration of this Doctor's character, rather than his era.

And the main character through the book isn't the Doctor but rather a canny, when necessary violent, receptionist, Bryony Mailer. Mailer is rightly awestricken when she comes face to face with this incarnation of the Time Lord but takes an instant liking to him. She is a strange combination of companions past and present but most notably, Leela, Tegan and Donna, she is a likable, if sometimes annoying character. Some other characters are named after Who characters, we have Ian Patterson, based on Ian Chesterton and Kamelion is well meaning but ungainly and subject to some unrequited love. But the only reason why Kennedy has included Mailer and Patterson is so that the Doctor has someone to tell his plans to. But, the Doctor spends most of his time talking to himself and somehow, that is where the book shines.

Other authors have tried to include monologues that the Doctor is saying to himself but they haven't really worked because only the Fourth Doctor could be the incarnation who could really get away with doing something like talking to himself. Kennedy captures the character of the Fourth Doctor and it is almost as if she has opened a window into his mind and allowed us to peer inside, watching his cogs go round and round. Because of this, The Death Pit feels a lot like a ticket to see the Doctor's mind.

But The Death Pit doesn't really have a central villain except for the one who lurks under the golf course. This is where the story feels like a bit of a let down as really, the Doctor needs something humanoid to interact with. We do get a character called David Agnew, yes, named after the non-existent script writer for the series, who fulfils the role of baddie for the Doctor. He's your bog standard baddie but not someone who you'd want to mess with.

Of course there are a few things which aren't too good, there is a distinct lack of the TARDIS, the Doctor not being the central character and there are a few plot threads which are left unresolved. But on the whole, I enjoyed The Death Pit but not one I would go out of my way to read again...