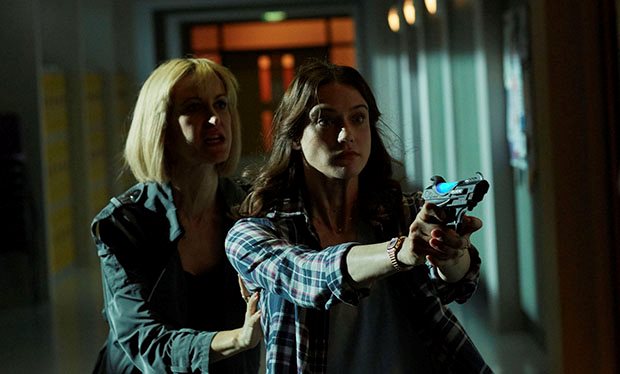 The awaited new Doctor Who spinoff, Class, has just released its first image from the new series. Just from this image, it looks like the series, created by Patrick Ness will take a look at the darker aspects of the Whoniverse.

This image details Katherine Kelly's mysterious Miss. Quill standing with one of her students, April, played by Sophie Hopkins. While April appears to be holding an alien weapon at some unseen threat, the strange Miss Quill, described in the character outlines as a powerful presence, appears to be offering her some encouragement or warning.

Of course, we don't know a lot about what is going on here as the show hasn't aired yet. There is some speculation that April is an alien given her gun or that Kelly could be on the side of the kids given her position with April.

Ultimately we won't know because the context of the episode might be completely different. But for now, it is an exciting new look into what promises to be an interesting series. And Class looks like it will be a darker take on Doctor Who, looking at what happens when the Doctor isn't around, much like Torchwood and The Sarah Jane Adventures once did.

I can't wait to see what happens!