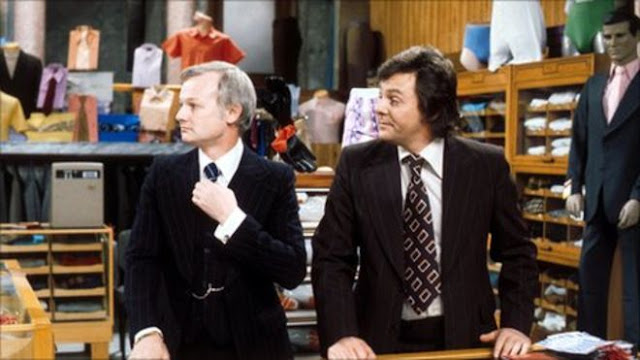 If you watch each episode of Are You Being Served? then you'll understand me when I say that it is a bit odd for the episode to say "Hey, I'm a Mr. Lucas episode!" Most of the stories involve the characters getting involved in some calamity or another. But this one is definitely centred around the character of Mr. Lucas played with mischievous charm by Trevor Bannister. Unfortunately, the writers didn't spend a lot of time fleshing out the characters so it is nice that the attention is just focused on, Mr. Lucas, each character gets some time with him and gets into some trouble or another because of his actions. Again though, Nicholas Smith's Mr. Rumbold doesn't get a lot to do as he pops in a few minutes toward the end of the story. It is fair to say that Mr. Lucas is the instigator of the farce that the people on the second floor of Grace Brothers get into.

Don't mistake me when I said farce. I didn't mean the whole thing was a farce like a rubbish joke, this episode couldn't be further from a farce as there are plenty of laughs to be had.

Miscommunication and crossed wires are ripe in this episode as Frank Thornton and Mollie Sugden as Captain Peacock and Mrs. Slocombe, inject just enough smarminess and incredulousness into their performances and thanks to them, the comedy on offer here simply sparkles! It is hilarious whenever Peacock finds Lucas in some sort of mishap and when Mrs. Slocombe believes that Lucas fancies the knickers off her... 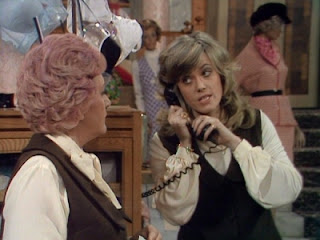 Wendy Richards as Mrs. Brahms puts in a wonderfully confused performance which ties in nicely with the role of her character as a new saleswoman. In some scenes, Mrs. Brahms
seems to relish the idea that someone fancies her rotten but she quickly changes her mind when Mr. Grainger, the elderly worker on the men's counter doesn't get the same treatment. The scene where she tells Mr. Grainger what she thinks about him on the inter-departmental phone and her arched eyebrows was brilliant as was Mr. Grainger's expression when he puts the phone down and tells Mr. Lucas and Mr. Humphries that some woman wants to have him on the carpet!

Arthur Bough puts in a wonderful performance as the aged Mr. Grainger who is an elderly gentleman through and through. He displays a completely Victorian attitude at the subject of seeing women from the counter opposite in a state of undress and a draconian attitude towards the younger members of his department. He believes that everyone has their place, something that he reminds his department of regularly. Actors, Frank Thornton, Arthur Bough, Trevor Bannister and John Inman have such great chemistry together than a number of their scenes, particularly in this episode feel like they have been improvised. Unfortunately, much of that interplay was toned down in the later seasons. Here though, it is glorious. 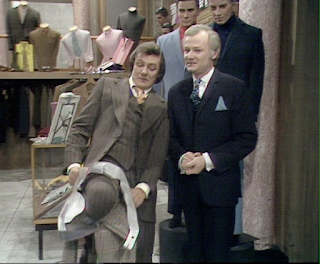 Series creators, Jeremy Lloyd and David Croft had both worked in a department store previous to creating this show so they brought a lot of their expertise in the field to the programme. This time, it was the term and act of Knee-ing jackets to stretch the stitches so that the clothing items better fitted the customers. While these scenes are very funny one is left to wonder why the customer wouldn't bring the garment back when the arms finally fall off?

The scene between Mr. Lucas and Mr. Humphries kneeing the trousers, the men's department find themselves explaining what happened to Mr. Rumbold. This leads to some confusion between the words needing/kneeing/kneading, in some nice word play which was obviously thrown in for good measure. But this leads me to wonder, as all of the department where with Rumbold, who was minding their counter? Does the whole floor shut down? Or do some of the extras take charge for a moment or two?

For me, looking at these stories from a writer's pointers view, there are some things which are unfortunately left dangling or unexplained. The plot is wafer thin - which is fine for comedy purposes but the suspension of disbelief pipes up slightly.

We have the whole business of Captain Peacock taking a phone call from Mrs. Slocombe who believes he told her she has sexy knickers. The scene is hilarious with Mollie Sugden delivering the line, "Hello Captain Peacock, this is Sexy Knickers!", wonderfully! Captain Peacock then gives the phone to the gossipy Mr. Humphries who listens in on the conversation with Mr. Lucas and then drops Mr. Grainger in it when he takes the phone. But why didn't Captain Peacock just put the phone down, rather than hanging up so that Mr. Humphries could surreptitiously pick the phone back up again?

And Mr. Lucas telling Mr. Humphries to inform Mrs. Slocombe that he has gone downstairs just doesn't make sense. There are no stairs behind the desk. I know it is supposed to be funny but this, for me, is the only gag in this story that falls flat. He's in a department store and he is on the second floor. For me, the fact that the joke doesn't make sense jars the scene slightly. But that is only a minor quibble.

On the whole though, this is a brilliant episode. For me, this story should have served the job as series pilot because the actual pilot fails to engage us with the characters. Here though, each character gets a moment to shine as they all accidently get involved in Mr. Lucas's antics. The episode is worth watching for the hilarious scene on the telephone between Mrs. Slocombe and Captain Peacock! Comedy gold!