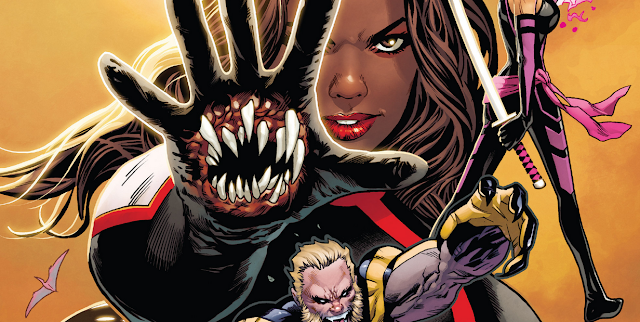 With the recent Apocalypse Wars the X-Men crossover event behind us, Uncanny X-Men #11 gives us a change to slow down a bit and allows us to meet some new threats and allows us to get into the heads of our favourite characters after the recent events.

The X-Men have always been the superheroes I have been able to identify with, perhaps its because I have always felt different, and their comics are the ones I always try to pick up when I get the opportunity. And the issues that occur after a comic book event are always a delight to read as it allows the writers and artist's to slow down a little and take a slight breather. In the olden days we would have had Jubilee and Professor X roller-skating around the Mansion grounds or the X-Men enjoying a great big breakfast. They were always brilliant little character pieces. 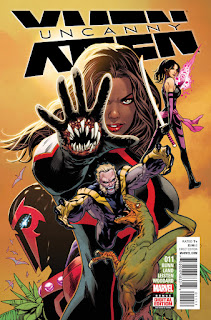 So we begin this issue with an attack on a research facility with a new band of supervillains who appear to be able to work together as a cohesive group. But they don't appear all that interesting. Maybe that is because they have only been introduced but it doesn't inspire a lot of confidence in me. But it is back at the X-Men's base in the Savage Land that makes this issue shine. We get a much needed moment to check in with our characters and see them process the events that have just ended for them and how they each question their place on this new team put together by Magneto of all people. We see that Monet is literally dealing with a hand-mouth situation after her brother, the X-villain, Emplate, had transferred himself into her body. His mouth appears on her hand and looks suitably disgusting. We get some nice panels which show her actually conversing with it.

Psylocke has recently been put off by Magneto's secret recruiting of Fantomex and Mystique to the team and his having kept it secret from the rest of the team. In their scenes, Magneto says very little but it is his silence that tells Psylocke all that she needs to know. But there is one tiny little gripe in these scenes for me, Psylocke says she considered leaving the team but, in the Civil War II event, she does leave the team in the limited X-Men Civil War II series. Does anyone at Marvel actually know what order the stories are written in?

Outside of the base we meet up with Sabretooth who is spending a lot of time hunting down a Raptor as he seems to falling to his primal instincts. He is beginning to be taken by surprise as to his wants and needs to hunt. Ultimately though, he gives in and rips the Raptor's throat out and then interestingly apologies' to his dead victim. I hope the writers continue to explore Sabretooths decent to his old ways and look forward to reading the further issues.

And it looks like we are headed for another Hellfire Club storyline. Actually having some issues of the original storyline to feature this group of villains, I really like the characters involved in the Hellfire Club. They are particularly interesting each time we meet them because their ranks always seem to change. Sometimes they are led by Sebastian Shaw, sometimes by Selene and sometimes, Pierce. But this time, it looks like it is being led by none other than Monet St. Croix, a member of this X-men team! Hopefully this will lead to some interesting interactions between all those characters who are involved.

Writer, Cullen Bunn does a good job of taking the pace of the book down after the recent crossover and artist Greg Land appears to have been up to the task as artist. A lot of people complain about Land's art saying that each character looks like they have been taken from porn and put into the issue. And I can understand what they are saying, they do sometimes look far to explicit to have come from the end of pencil but his artwork is crisp and clear and one can see what is going on, which is more than can be said for some of the artist's who work for Marvel who can deliver some real headache inducing messes!

So with Apocalypse Wars now firmly behind us, it is time to return to the type of stories that us long term comic book fans remember so very fondly. This issue gives the characters and the readers a chance to reflect. So, for any readers who stopped getting this book during the previous event, this is a good issue to start collecting from again as it takes the characters back to the good old days and helps to remind us that, no matter how different one may feel from their fellow man, it is that difference that you must bask in. It is what makes you unique. And this is a great issue to remind of that!