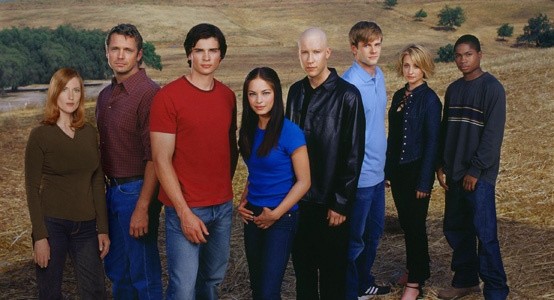 Following on closely from Lois and Clark, Smallville went right back to the beginning of the superheroes' story taking us right back to when the Kents, Martha and Jonathan find a small boy in the middle of a cornfield...

Whether you like it or hate it, Smallville's popularity paved the way for the superhero extravaganza's that we have both in films and on television nowadays. And the show never failed to bring in millions of viewers each week. I came to the Smallville game quite late, catching the last season before catching up with the show through the DVDs. Who cares if the show strayed slightly from the source material in the later seasons, who cares if people didn't like the fact that the show was about Superman's origins, even if they weren't exactly the same as they were in the comics? It didn't matter, Smallville was a fresh new take on the tale of Superman and is still the show which raised the bar high for other television series' in the same superhero genre to try and reach. 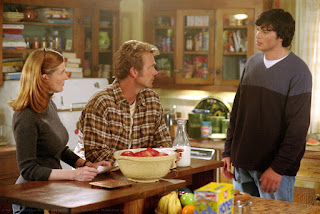 Like I have just stated, Smallville took the traditional tale of Superman but gives it a new spin and the show starts with a bang. Literally. A huge meteor shower hits the quite Kansas town of Smallville which sees Lana Lang's parents killed, large part's of the town destroyed and the loss of Lex Luthor's hair. In the comics, Smallville has always seemed like a nice quite place to live, possibly in retirement. But from the opening scene it is obvious that this Smallville was a much darker and scarier place to live.


Perhaps one of the best things about the show was the casting of Tom Welling as Clark Kent. From the first proper time we meet Welling, he is Clark Kent. Everything about him screams Superman, his physique, his handsome face and the way he wears plaid which is always in those Superman colours of red and blue. He is an example of perfect casting and I'm proud to admit that Welling will always be my Superman!

While in the later seasons, he would embrace his Kryptonian heritage, here his story sounds like something from a Disney movie, he wants nothing more than to be normal but his powers make it so that he can't be. Now we all know there is nothing wrong with being different its what will make you stand out amongst the rest but Clark, especially in the early seasons, sees his gifts more as a curse than a blessing. Thank god then that he has brilliant parents. Something which I liked about Jonathan and Martha Kent is that they were both younger than they are in the comics, Jonathan, played by John Schneider does the father figure, the earnest and forthright man very well as he imparts wisdom when he needs to.

Martha Kent played by Annette O'Toole is a brilliant mother figure, though there is one thing that annoys me slightly about her characterisation is this season. She always defers to Jonathan. It might come across that at this point, she wasn't big on feminism but gradually, as the show evolved, she took on Kryptonians, Brainiac, told Clark's real father, Jor-El off, fought both Lex Luthor and his father Lionel, survived alien diseases, two meteor showers, the spaceship explosion, a tornado, numerous kidnappings, death attempts and became the mysterious Red Queen in season 9! She is one tough lady! 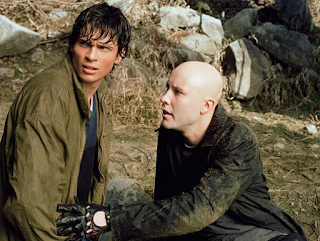 What is interesting in this episode is the way the producers made Lex and Clark meet. Lex literally drives into him on a bridge in an accident. Its alright though as Clark rescues him. What seems like th beginnings of a friendship also has certain undertones, Lex is suspicious of what happened to him and as we'll see through the course of the entire show, those suspicions are something aren't something he can easily give up.

Lana Lang is obviously the prettiest girl in school and she always makes Clark weak at the knees. This could be because he has such a crush on her or it could be because of her necklace, a piece of kryptonite that she took from the meteor that killed her parents. Her belief is that there was so much bad luck that came from that day, there can only be good luck left. But she has dubious taste in men as her boyfriend, Whitney isn't very nice to anyone around her as he plays into the quarterback stereotype and is jealous of anyone of the male gender who happens to glance in Lana's direction. This jealously leads him to string Clark up in a field in the morbid Smallville High tradition of stringing people up as the 'scarecrow'.

The space for Lois Lane is filled by the intrepid wannabe reporter, Chloe Sullivan who is very reminiscent of Willow from Buffy The Vampire Slayer. It doesn't take her long to introduce us to her 'Wall of Weird' a scrapbook explosion that details every weird thing that had ever happened in Smallville since the meteor shower. Given his supposed best-friendship with Clark, Pete Ross spends more time with Chloe and the pair appear to be attached at the hip. It is unfortunate that the pair come across as quite small next to Clark who helps them out at the school newspaper, the Torch. 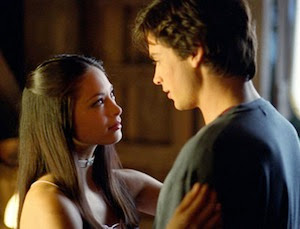 The other thing that immediately stands out about the show is the use of colour scheme. The Kent truck is red as are the tulips that Martha loves. Lex had red hair and red is used as the school's colour. The farmhouse on the Kent farm is yellow as are the big sunflowers that are in front of it. And Clark is almost always seen wearing red or blue which are the primary colours in Superman's costume. These colours immediately give the show a comic-booky feel.

When I first began re-watching Smalliville it was through the repeats on Sci-Fi and I will admit, I wasn't too enamoured with the first part of season 1 but through the DVDs, I have come to appreciate them. Perhaps the only thing that really sticks out as a slight mistake in my mind is the way Clark uses his telescope in the barn to 'spy' on Lana. We get the sense that Clark is a peeper! Oh dear. But this was a great way to begin the re-telling of the classic Superman tale...