Once Upon A Time: Season 3 Episode 3: Quite A Commen Fairy Review 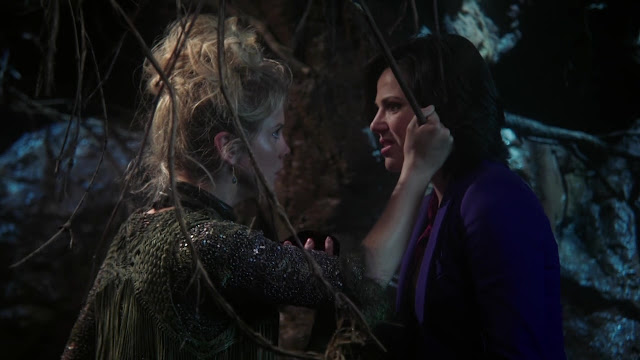 With the gang stuck for the foreseeable future in Neverland, there has been one character that the previous episodes have been missing. Tinkerbell. Luckily, this episode introduces us to her and sets her up in the OUAT mythology. She's not just annoyed that she isn't the centre of Pan's attention but the writers have set her up with the back story that we don't get in the Peter Pan movie. It turns out that her past is linked with Regina's when she tried to help her find her true love. It's very heart warming, just imagine what Regina's life had been like if she had used Tinkerbell's help.

The set is perfect and helps us to understand why Tinkerbell is rightfully angry when she discovers that Regina has turned up in Neverland. And given her hatred for the witch, it makes sense that her help wouldn't just be given with a little pleading. But we can see that Tink is still holding onto hope in her heart even if no one believes in her anymore. Oh, and she owes Hook a big favour, I guess we'll have to wait and see what that favour is...

It was nice to see Regina finally expressing some sadness about the disappearance of Henry and using her brains instead of her magic for a change. She even calls the rescue mission Operation: Henry and thanks to the magnificent acting from actress Lana Parilla, we can see that she is hurting deep down in her dark heart and one can't help but feel a pang of sympathy for her. Regina really does love Henry in her own twisted way.

Still, nothing exciting happens with Henry this week. Alright, he gets to fire a poisoned arrow at Pan but this was brushed aside pretty quickly. Which was a big mistake as it was such a different move for the character, more attention should have been paid to it. It is a shame it isn't. It is also a shame that the actor who plays Henry just can't act. Maybe, when the series finishes, he will have gotten a little better, but here, his scenes are a little painful.

It was also strange to learn that it might be Henry who is the saviour instead of Emma. We all know that Pan lies but what if this time he isn't? I hope it is a little lie told by Pan to annoy everyone as actor Jared Gilmore doesn't have the acting ability to be the one to bring magic back to the world.

Also, the theme of love and family was particularly strong in this episode. It was Robin Hood who finally gets a chance to make something of an impression and actor Sean Maguire is a natural as the legend. I was surprised that he agreed to use his own son as bait to help Neal get into Neverland but it was clear that Robin understood how important it was for Neal to get back to his family. Does that mean that Robin lost someone? Someone like Maid Marian? Also interesting was the fact that Robin and Regina were who Tinkerbell put together, it would be interesting to see that love story told but maybe by her finding love, it would change the Evil Queen's character a little too much.

But the biggest thing that happened in this episode centred around Mulan. So surprised by her conversation with Neal about confessing true love she heads back to none other than Aurora to confess her love for her but gets stopped when Aurora tells her she is pregnant. I am really pleased that Disney is finally making more steps in the LGBT direction and it feels like a major step for them, I'm just a little disappointed that Mulan never got to confess her love.

It was also nice to see a little cameo appearance from Thor's hammer in Rumple's castle. While it does seem unlikely that characters like Thor will ever appear in the series, it shows that the show is open to other worlds. Besides, who wouldn't want to see a little Avengers crossover?

While it was fun to finally meet Tinkerbell, the character seemed to only appear due to the fact that this was another episode that lacked a contribution to the overall story plot. After what I considered a decent premier, the series has declined in story telling quality over the last episode. I am a little bored watching these episodes after the first two seasons kept me enthralled. I hope things pick up soon...