Once Upon A Time: Season 3 Episode 10: The New Neverland Review 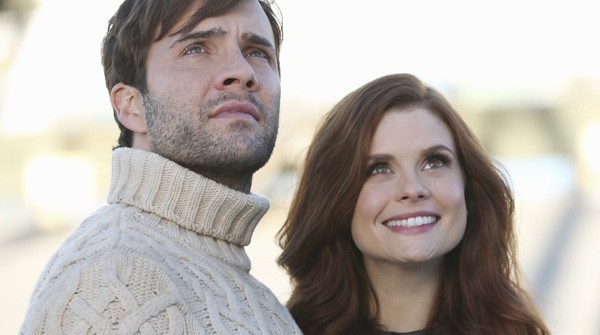 Yes! Hoorah! Rejoice! We're finally back in Storybrooke! After nearly ten episodes of not appearing at all, the group of Emma, Regina, Mary Margaret, Charming, Hook, Rumpelstiltskin, Neal and Henry return home. We are treated to some nice scenes between Rumple and Belle whose unconventional love story continues to delight. But the best moment was when Ariel finally finds her Eric. Alright so he was cutting the heads of off fish and it was a goofy touch considering Ariel is a mermaid but it worked. And the simplicity of their reunion managed to reach into your heart!

It is the death of the Blue Fairy that comes out of nowhere. I expected Pan to do something to make his presence known but not to this degree. It isn't that OUAT avoids the subject of death but with magic being around, it works as a convenient life saver. But it doesn't save her and while she wasn't fully developed or even very likable it packed enough of a punch to hint that maybe the show will stop relying on magic as a way to cure all.

What was odd to me too was that Emma seemed more worried about what might be going on between Hook and Tinkerbell. Someone is screaming and dying and she is worried he is off sleeping with the former fairy?! She could have at least waited for a more convenient moment before questioning Hook about it.

Josh Dallas has always impressed as Prince Charming and has plenty of potential to become one of the best characters in the series. His father/daughter talk with Emma proved that is more than capable of that. As well as his great delivery, the whole scene was well written, the script capturing the optimistic tone of the series and the belief that good will, must, always win. And his jokes offer the viewers a few laugh out loud moments!

Character interactions seemed to be key in this episode and the scenes between Hook and Neal were particularly good. Both Colin O'Donoghue and Michael Raymond James are stand out actors in the cast line up and we don't need to see them fighting over Emma. Who needs that when they can have mature discussions like they have here. Hook isn't obviously the untrustworthy, though charming, pirate we all thought he was.

Another scene that was entertaining was the fight in the flashback sequence between Charming, Snow and Medusa. Medusa looked pretty cool but nothing about that scene really tied into whatever is going on in Storybrooke at the moment. It would have worked better had Medusa been some part of stopping Pan.

This episode is more of a filler one rather than one that will deal with the imminent problems with Pan. The flashbacks could have easily been cut to allow for the characters to deal with Pan.

It was interesting to see Robbie Kay playing Henry rather than Peter Pan and while Henry doesn't really have any mannerisms for Kay to lock into, it was nice to see him playing a goodie rather than a baddie. It'll be sad to see Kay go when they wrap up the Pan storyline. Had Pan's plan been like this from the beginning, then maybe our journey to Neverland would have been more enjoyable.

It was a great relief to finally get back to Storybrooke and the writers and producers get some points for not dragging this little part of the plot out for a few episodes. Although the dialogue could have been a little less clunky in places, this episode was full of enough character moments to make it worth watching anyway.