Doctor Who: Palace of the Red Sun Novel Review 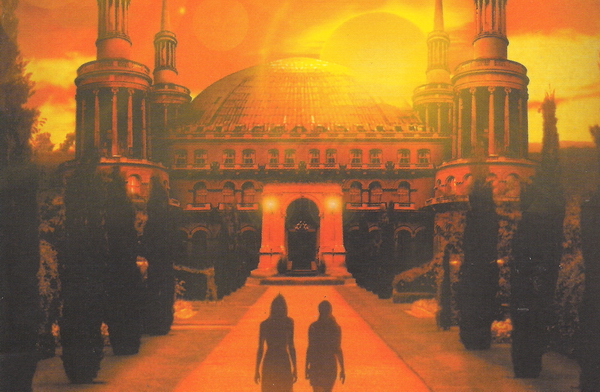 The Sixth Doctor and Peri have arrived on the idyllic little garden planet of Esselven. But they are both unaware of a 500 hundred year old mystery which is about to unfold around them and the inhabitants of the planet. And the tyrannical Glavis Judd is about to arrive on the planet with the intention of wiping out the royal line, people that Judd has wanted to kill for decades...

The first thing that people will notice about this novel is its characterisation. Both the Doctor and Peri sound far too familiar to each other which is overwhelmingly surprising given that on television, the pair couldn't have more different! That difference was part of the appeal of their Doctor/Companion relationship. What makes up for this oversight are the delightful scenes between the Doctor and his robotic friend for this adventure - Green-8. Green-8 is a robotic servant constructed with the soul purpose of maintaining the nice gardens. But Green-8 has been working for so long without being maintained that he has begun to evolve and develop a soul of sorts. And like other famous robots from the history of Doctor Who, Green-8 makes the perfect companion for the Doctor during the duration of this novel. Their scenes together are a delight to read and it has some sweet little moments when Green-8 begins to feel emotions for the first time and doesn't know what to do with them.

One thing this novel does get right about the dynamic between the Doctor and Peri is that Peri knows the Doctor will always come back for her. Peri gets the change to really strike out on her in these pages and have a real adventure without the Doctor around. She chases after a giant teddy bear called Boots and like Alice, falls down a hole. She befriends a local scavenger and manages to narrowly avoid becoming his wife and she confronts an old friend/foe, Dexel Dynes. She is also allowed to discover the majority of the plot. In many ways, she is given more to do than the Doctor and becomes the main character.
The novel also plays up to Peri's actress, Nicola Bryant's, natural beauty with Dynes, a mad reporter, describing her as 'Appealingly photogenic and would have scored high viewer approval.

But perhaps the best thing about this novel is the cover, which reminds one of many summers sat out in the garden basking in glorious sunshine during some lazy afternoons. And one has to adore the opening chapters of this book for it's characters, Luci Longlocks, Boots the teddy bear, the garden robots and the darker - Wild Woods. Oh, and the Doctor nearly getting into compost!
Author, Christopher Bulis does a good job of describing the planet which orbits two suns which never go down, basking the surface of the planet in eternal sunlight. Because of this, the inhabitants have no way of telling the time, no way to keep track of the days and years and no natural awake and sleep cycles and they have no idea about what stars are. To them, they are the only people in the universe. But all that changes when Judd uses his massive spaceship to crash through the defensive barrier which stretches around the planet and Dynes manages to sneak to the surface first and make contact.
But the whole thing turns out to be a computer programme, created by the royal family who are fleeing from Judd and who arrived on Esselven. Each character except for the scavengers turn out to be artificial constructs which gives us a nice twist which I didn't see coming and we learn that, given how the real royal family died over 500 years ago and the programme resetting itself every ten days, the robotic servants were driven insane and began to believe that these characters were their Lords. The characters come from the play, The Princess of Aldemar, (something which isn't real so don't bother looking it up!) and the Princess Oralissa is the only one of the fiction characters who can see that something is wrong with her world.

An accident which happened on the planet 500 years ago caused all of the royal family, except for the King, to abandon their Summer Palace and take up refuge in the Wild Woods. So the Scavengers turn out to be the descendants of the original royal line, which immediately puts them at risk of attack from Judd should he ever find out. But it is alright in the end thanks to the Doctor and in a nice final twist, the Doctor changes the setting on the shield so it takes Judd and Dynes, what only feels like a couple of minutes to them, another 500 years to leave the planet. By which time Dynes is a relic in journalistic terms and Judd is no longer in control of an empire which crumbled not long after he went 'missing'.

Palace of the Red Sun suffers greatly from the weight of the mysteries that the writers piles on resulting in the reader wanting answers by page 200. The plot is spoilt a little by the bland execution which is a shame given the well constructed world and characters involved in the book. But the conclusion ties up everything nicely and the fate of the villains is nothing short of ingenious! This book is far better than it's unfortunate reputation and is one that, once you start reading, demands that you finish it!