Horror Revisited: The Woman in Black: The Angel of Death 2014 Movie Review 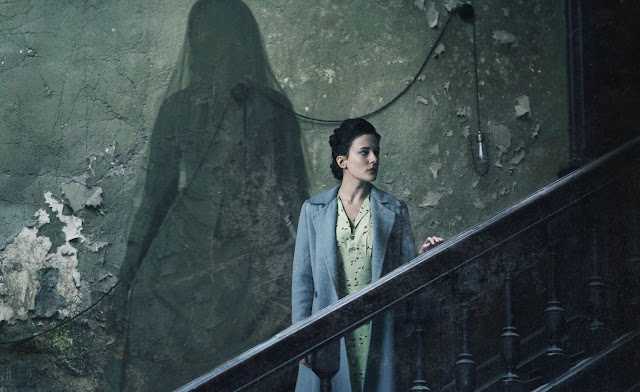 In 2012, the revived British horror movie industry Hammer did something wonderful. It created a horror film that did a valiant effort of creating an effective ghost story rather than just dumping our characters into a generic haunted house. The Woman in Black 2 comes with the meaningless subtitle, Angel of Death, no doubt to stop people confusing this one with the previous one. When I say meaningless, it makes the film sound cool even though she has nothing to do with an angel of death. However, Angel of Death tells us the story of a group of teachers and students who, trapped in the London blitz are taking to Eel Marsh House as an evacuation. But what they don't know is that the spirit of Jennet Humphries isn't gone and the children only manage to stir the waters and grab her attention...

While not as creepy as the first one, this one plummets for full on horror with added jump scares. This is slightly disappointing as the creep factor was what made the first film so enjoyable but there is nothing here that horror fans won't have seen before. We are all used to the generic haunted houses with creaky floorboards and broken Victorian bric-a-brac. What this film does attempt to do is show us the Woman in Black's powers through the eyes of one of the children and the affects those powers have through the eyes of his teacher.

Little Edward is usually a friendly little boy until his parents are killed when their house is destroyed in the blitz. With little time to grieve, he is sent away as one of the evacuees to Eel Marsh House but he hasn't spoken a word since his parents died. This would pose a problem with the continuing plot but the Woman in Black uses him to draw mildly creepy pictures and tells him things. His teacher, Eve, tries to comfort the boy which only ensures the anger of the ghost. She begins to attack Eve both mentally and physically while gripping tighter to the boy she wants. As soon as Edward reaches the house he begins to draw and the other students begin to do strange things as the ghost begins to kill them off. Their deaths are quite gruesome with one boy drowning when he is caught in barbed wire and a little girl suffocating herself with her gasmask. While these deaths are gruesome I felt they do fail to demonstrate just how powerful the Woman in Black actually is, surely she could do so much more?

And that is another thing, for her own film, she gets very little screen time, appearing here and there but mostly being relegated to the background. She does get a few good moments like were Eve sees her as a nurse in one of her dreams, a scene which succeeded in making me jump and when all the characters are trapped in a dummy airfield and she turns out all the lights. During the first film, we hardly saw her away from Eel Marsh House, although we knew she was there but here she gets to travel far and wide. The airfield scenes are possibly my favourite bits about this movie as the ghost character really works well when she is away from the house. It also demonstrates that she isn't limited to one place like many ghosts in horror films, this one can follow you anywhere you go!

But what this film fails to do is scare. Sure you get a few jumpy moments but they are nothing to write home about and it lacks the creep factor that you need. It does keep things interesting as it is based on the follow on book from the original novel written by Susan Hill, that people have probably never heard of. I urge you to read the follow on book as well as the original as they are both great reads!

Personally, I like this film even though its got a bit of a bad reputation but I think I love the whole Woman in Black thing, the books and films are some of my favourite pieces of different mediums and I have no doubt that even the most harsh critic will find moments to enjoy here. And its not bad of a major motion picture with a budget of only $1000! Maybe another film could be on the cards. When the Woman in Black appears in Eve's London apartment it sort of sets up a possible future film, one I would be interested in seeing, perhaps set in modern day, I doubt the passage of time would daunt this vengeful lady! But even if this is the last film we see from The Woman in Black, I doubt it will be the last we hear from her...