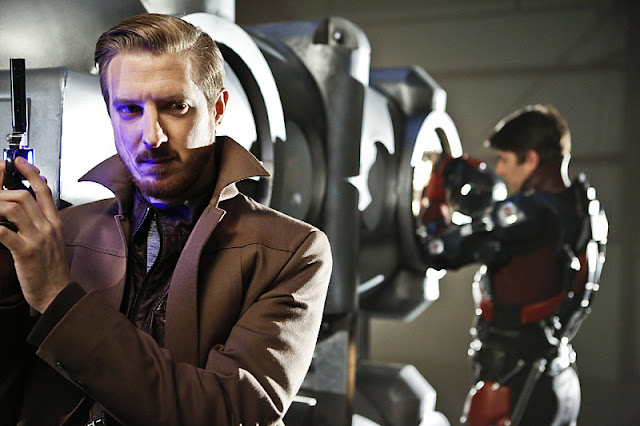 I think it is safe to say that Legends of Tomorrow has featured more ups and downs in terms of quality than either Arrow or The Flash did in their first seasons. But, the show really seems to have found it's feet in the past weeks and is building up to what feels like is going to be a superb series finale. The show has really found its pace and drive that it seriously lacked in those early episodes and that fact is blatantly evident here.

Having set up the deck at the end of the last episode, that deck was seriously stacked against Rip and our heroes in this episode. Vandal Savage returns to 2166 with Kendra and Carter in tow, Professor Stein begins to die because of his decision to send Jax back to 2016 in the last episode. Mick faces being turned back into Kronos and serving the Time Masters again for the rest of his days and Rip was burdened with the information that all he has done was planned out by the Time Masters from the day he left.

But don't forget that the darker the circumstances, the more chance our heroes have to shine. And that is what this penultimate episode boiled down too, a series of great moments and one truly amazing act of self sacrifice as they made one last desperate attempt to save the world.

There is no doubt that this episode really belonged to Captain Cold and Heatwave, two characters who have received the most character development from their time on the show. When they agreed to join Rip's team, they were criminals on the lookout for a good score but gradually, they changed, becoming more reluctant heroes who were trying to do the right thing even though it went against who they were.

Mick was the one willing to throw his life on the line to save people who had become his friends and agreed to make the ultimate sacrifice. But, harkening back to that early episode were Cold betrayed him, Leonard knocked him out and used himself as the human sacrifice. Out of the whole team, it was Snart's death that carried the most weight because he was one of the most popular of the characters in the show. That was probably why he was chosen and his death really feels like a noble act that wraps up his character arc in a way that seems fitting to him. I am happy to hear though that he will probably return at some point to either this or The Flash but for now, he was written off in a spectacular way.

This episode also explored the un-mentioned by completely obvious romantic tension that had been going on between Sara and Snart. Even though it was only addressed in this episode, that romantic subplot was far more interesting than the irritating love triangle that has been going on between Kendra/Carter/Ray. That is probably because of the great chemistry between actors, Wentworth Millar and Cathy Lotz but it also serves to prove that it is only romance that feels real and organic that can work in shows like this and there was nothing that felt real or organic between Kendra and Ray.

Ray also had some really strong moments this week no doubt helped by the fact he wasn't fawning over Kendra for the entire episode and instead, Ray was left to face his own impending death. It was Ray who was supposed to die in this episode because of a future vision that Rip was granted but Mick worked out that it was all what the Time Masters wanted setting in motion a series of events that no one could have predicted. But one gets the feeling that Ray's arc was nowhere near finished and feels like it still has a long way to go yet so I hope we see more from him the second season.

Jax and Stein also had some nice moments when Jax arrives back in 2016 a few hours before they all left with Rip. He enlists Stein to help him get back to the team and in their few scenes together we see how much both of them have developed and come to rely on each other. In the beginning the events in which Stein came to bring the younger Jax on board the Waverider seemed strange but this episode makes it all make sense. It was Jax who put the idea to drug him in Stein's mind in the first place!

There were also a lot of other nice moments here with Arthur Darvill giving us one of his best performances to date as the utterly defeated and broken Rip Hunter who is struggling to come to terms with what the Time Masters have been doing to him and his team. Casper Crump also fared well as Savage in his few scenes in this episode with his murdering of Rip's wife and child seeming far more tragic in light of these new revelations. But does the fact that Savage travelled back through time to commit the murders make them impossible to undo? I guess that is a question we will get answered in the finale episode.

This episode also offered us a few hints as to which direction the show will be taking in series 2. With the discovery that the Time Masters allowed Savage to rise to power to stop an alien race called the Thanagarians. In a way, Savage is the lesser of two evils and I'm assuming that the second season will focus around Rip assembling a team to stop these aliens before they can destroy the Earth. However, with the possible inclusion of the Thanagarian's it means we will probably be seeing more from Kendra and Carter in the next season but who knows, they may fair a bit better once they are out of the shadow of Savage.

For the past couple of weeks, Legends has given us some great episodes but this episode is possibly the best so far giving each member of the team their own moment to shine. But there is no doubt that this episode belonged to Captain Cold who sacrificed himself to help save the world. Not bad for someone who had begun his life as a criminal...