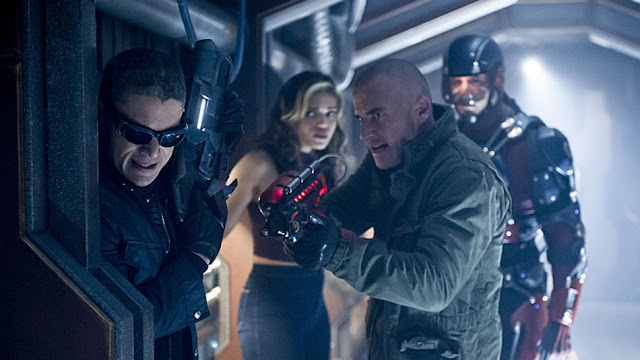 Surely the previous episode should have spelt the end of the season has, against all the odds, Rip Hunter and the team managed to defeat Vandal Savage and take him into custody? But, just as you think the team's mission is complete, the show pulls another U turn and gives us a piece of information that will neatly set up the remaining two episodes. And, River of Time, shows us just how dangerous an immortal villain can be.

It has been unfortunate for the series that Casper Crump's Savage has been one of the weak points for the series as he neither has the charm or charisma that The Flash's Zoom or Arrow's Damien Darhk has. But this episode marked a turning point in that respect. While Crump's performance still has its ups and downs, mainly due to his thick and un-Egyptian accent, but he managed to prove what a master manipulator Savage is. Here is portrayed as a Hannibal Lector character, someone who is praying on his victim's fears and getting into their heads.

He also benefits here from having a heavier focus put onto him. He also comes across as a strong multifaceted villain where he can be creepy and had a physical presence that he hasn't really had up to this point. But, bubbling just below the surface, we can see his pain at not being able to have Kendra, someone who he truly craves. And as much as Savage might have taunted Ray about how they more similar than they want to admit when it comes to Kendra, he isn't wrong, now that Carter has turned up on the scene again, what chance, like Savage, does Ray have?

But Savage knew that, even though he was locked up, he had won. Eventually, when the team get him back to the Time Masters, he is released and returned to 2166 to continue his reign of terror much to Rip's disbelief. Rip had effectively made the team fail when he locked Savage up and that realisation is a bleak but effective way to wrap the episode up and a decent enough way to lead into the final two episodes of the season.

There was also plenty of solid character work going on this week, especially for Rip who we discover is still dangerously more loyal to his family rather than the people he recruited to help save his wife and child and there was a real sense of betrayal when Sara and the rest of the team discovered this. It appears at the end that Rip wins back their trust when he takes a laser beam for Kendra but no doubt the real loyalty test will come some point in the next two episodes.

Professor Stein and Jax also got a nice little subplot, though it should have had more screen time that it was given, with Stein trying to atone for his questionable way he brought Jax along in the pilot. But he potentially sacrifices his life so that he can save Jax's who is caught in a sort of temporal explosion which causes his body to rapidly age. The scene where Stein puts Jax, against his will, on the jump ship and sends him back to 2016, knowing that without Jax, he might die is little sort of heart-breaking. But there is no doubt in my mind that Jax will find a way back in the next episode and be the key to free Rip and the others.

We were also treated to a series of flashbacks in this episode, which give us a little more insight into the reasoning behind the character's decisions to leave with Rip. They also showed us what some of these characters, especially Stein and Jax, would stand to lose if either of them died in their mission. It seems like the reason these flashbacks were included though were because someone is going to die at some point in the next two episodes.

But the love triangle between Kendra/Carter/Ray was as annoying as always. Alright they were some good moments like when Ray saw his fiancé trying to get the man she is destined to be with back but it was the end of that triangle which wasn't handled very well. Despite all her going on about defying fate and staying with Ray the first thing Kendra does when Carter shows back up is to dump her fiancé? Hopefully the next season will remove these love triangles.

Carter also had a good showing this week and it was nice to see a more twisted version of him and it wouldn't hurt if he had a bit more of that kind of character about him all the time.

This wasn't the best episode of the season despite some great character moments, it was perhaps spoilt the most by the irritated love triangle we have had going on in the background but it set things up nicely for the final episodes. It was nice to see Savage become the villain he should have been all along and now the deck is truly stacked against our heroes, which is just as it should be!