Doctor Who: The Moonbase Review 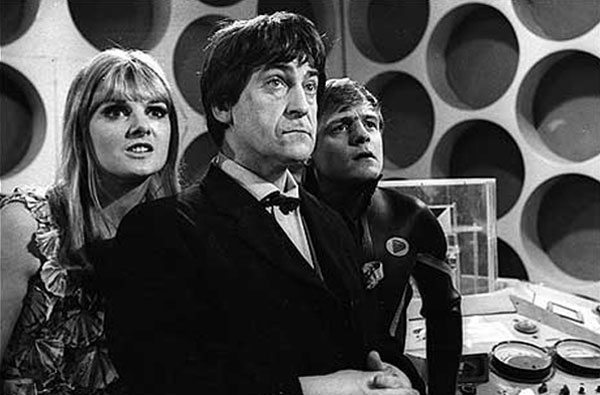 Whatever flaws this story might have and believe me, there are a few, The Moonbase is, without a shadow of a doubt, one of the Second Doctor stories you just have to see. And, thanks to the recent animations of episodes 1 and 3 it is the earliest complete Patrick Troughton serial on offer. It is excellent to see Troughton in this one as he is obviously still trying to work out how to play the Doctor and he settles on a darker tone here, one that we wouldn't really again till the Colin Baker years.
And of course, it was the second appearance of the Cybermen and the one that ensured they became one of the Doctor's most persistent villains over the next 50 years.

After their first appearance in The Tenth Planet, the Cybermen had become very popular. Not quite on the same level as the Daleks who had swept the nation with their Dalekmania in the early 60's but they were pretty close. However, the Daleks weren't as popular as they were before and one wonders if the writers and producers knew just how popular the Cybermen actually were? 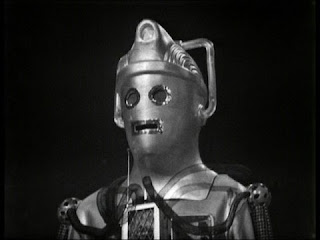 It is thanks to The Moonbase that the Cybermen replaced the Daleks as the go to monster for the Troughton era, they would go on to appear a further 3 times during his tenure as the Doctor but were mothballed because of their overuse. The Third Doctor never met them until they were brought back in the mid seventies and even then, it was only the once. It wouldn't be until Earthshock, 15 years after their final appearance in The Invasion, that they would once more become as prominent as they had been.

At this time in the show's history the TARDIS crew consisted of too modern day Londoners in the form of Ben and Polly, the Scottish Jamie who had come with them from Culloden and the strange new Doctor. It is a shame that it was so obvious that the writers didn't 100% know what to do with Jamie who they incapacitate at the beginning of the story so that they didn't have to shift too much around to include him in it. But, did they have to do it in a really stupid way? Being from 17th century Earth, Jamie was never going to be clever when it came to future technology but he would have been clever enough not to jump into a wall while bouncing about on the moon. So why did they do it? I get the feeling that had he been in the show for sometime, then Frazer Hines would have asked to be written out of a couple of episodes with a better reason than that!

As was usual at this time, the show picks up at the end of the last serial and the TARDIS is suddenly pulled off course while the Doctor is trying to get to Mars. Instead, the ship lands on the moon and Ben and Polly insist on going outside, which is completely understandable, its 1967 and it would be another 2 years before Neil Armstrong would set foot on the moon. The Doctor allows them all to go outside in spacesuits but insists that they get back to the TARDIS as soon as possible. Could it be, like in The Tenth Planet, the Doctor already has some foreknowledge of what is going on?

But then Jamie stupidly knocks himself out and the crew find themselves inside the moonbase which, like the South Pole base in The Tenth Planet, is isolated. There is little resources and the crew is quickly succumbing to a strange plague that sweeps round them. But the base is a sitting duck, ready to be taken over by the enemies of humanity. It won't be the last time Doctor Who uses that plot! 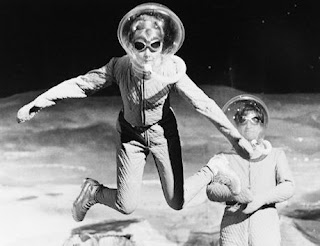 The moonbase is a weather control station for earth and from the base, the harsher weather formations can be veered off course from populated areas. They control the weather with the use of the gravitron a device which can remove all the gravity from around the storm fronts and dissipate them. The Doctor quickly deduces that it must have been this machine that dragged the TARDIS off course. But you may also want to believe that TARDIS saw the Cyberfleet and diverted its course so the Doctor could stop them. As the TARDIS said in The Doctor's Wife, "I didn't always get you to were you wanted to go but I always got you to were you needed to be!"

Over the course of the Troughton era, many stories seemed to feature global devices that gave humanity control over their environment, The Gravitron is a double edged device, while humans can use it to aid them, the Cybermen can use it to destroy them and being a machine, it knows no different. When it becomes apparent that the Cybermen are the ones behind everything going wrong, the commander of the base called Hobson is forbidden to switch the Gravitron off in case it sends all the weather up the spout. But could it have been the Gravitron that mucked up the weather in the first place? Is there no one that specializes in weather studies in 2070?

Unlike the gruff crew featured in The Tenth Planet, the crew in this story lacks any sort of military presence. Instead there is a boss who likes to talk tough but has no instinct for suspicion or security at all despite having been put in charge of a machine that could wipe out all of humanity. Where General Cutler in the South Pole base threatened to have all the TARDIS crew shot, Hobson instead tells them all to get off the moon, even though he has a suspicion that it might be the newcomers who have something to do with the mysterious illness. It doesn't really make a lot of sense but luckily the story rattles along at such a pace that there is little time to stop and breath and wonder about the plot holes.

It is this brisk pace that is particularly effective in the cliff-hanger to episode 2 when the Doctor realises that the Cybermen have been hiding in the very room he has been working in all along. It is thanks to the fantastic acting from Troughton that this becomes one of the most iconic scenes of his era and not one that is laughed at because he managed to miss an 8foot robot with metal feet hiding under a sheet.

It's the Doctor's companions who really make the boldest moves here. Ben and Polly both act on their own initiative against the Cybermen. It is a really welcome change from the other times that Polly has been patronised. Sure she still has to make tea for the men on the base but she really shows her worth when she comes up with a cocktail solution that can stop the Cybermen from properly taking over and she refuses to let Ben sideline her with his comment about taking down the Cybermen being mans work. Tell that to all the companions who have taken down the Cybermen, Tegan, Nyssa, Peri, Ace, Rose, Amy and Clara. 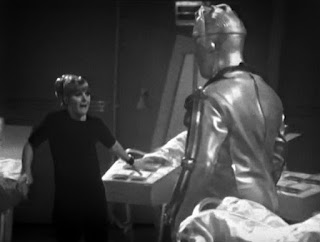 The Moonbase is a great success for the Troughton era and is one of the standout stories from that time if not, the entire sixties. The direction is tight and the acting great and this really builds the sense of claustrophobia that this story was trying to create.

With the Cybermen finally destroyed the Doctor, Ben, Polly and Jamie head back to the TARDIS but little do they know that the Cybermen always survive...