Doctor Who: Kingdom of Silver Review 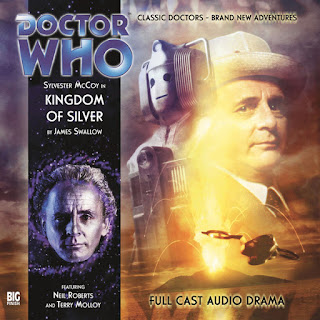 There are very few Doctor Who stories that I just plain don't like. While listening to Kingdom of Silver, I have never been so bored in my life, I found the wall I was painting at the time I was listening to this far more interesting.

But, I'm going to try and be objective throughout this review so, please bear with me!

It is an unfortunate truth that there are a few Big Finish stories that you need to stab yourself with needles just to keep yourself awake through. These stories are very rare, and they are usually, in my experience, stories like this, where it is just the Doctor and no companions. Then there are some stories that keep you really interested in what is happening. This story on the whole falls uncomfortably between the two and ends up being a story of no particular note except the fact that it sets the stage for the second series of the Big Finish series Cyberman.

The story is a pretty traditional piece in terms of storytelling. The Doctor lands on a planet. The silly inhabitants of said planet find Cybermen technology that has been left behind. Stupid planet people begin to fiddle and meddle and the Cybermen wake up and the whole thing descends into chaos. It is something we have all seen and heard time and time again.

There is nothing remarkable about this story, not even the acting. It is a shock that Sylvester McCoy isn't at his height here, even his performance is wholly underwhelming. One could also argue that Nicholas Briggs is in it too much. I didn't like the fact that Terry Molloy was also here as he is so good as Davros, you can't see him as anything else. There is nothing spectacular about the direction here, considering it has been directed by Ken Bentley, I felt really let down by the whole production. Bentley usually produces some absolute crackers, nothing like this complete and utter tripe.
There are also some moments when one wants to smack the Cybermen round the back of their tin heads as their conversations are far too sci-fi for anyone to keep up. Although the story lasts for only three episodes, that is two episodes too many, but thank god, it could have been four episodes.

I also couldn't be bothered to finish the standalone story featured at the end of this story as it featured many of the characters that bored me in the main adventure, if you can call it that. I tried to, I really did but I gave up somewhere along the line. I could have listened to this again but to be honest, I would rather have plucked my own eyeballs out.

Although I am a dedicated Doctor Who fan, this story was a complete and utter waste of money for me but I'm sure there are some fans out there who like it. Whatever floats you boat I suppose.

KINGDOM OF SILVER, WRITTEN BY JAMES SWALLOW AND STARRING SYLVESTER MCCOY WAS RELEASED BY BIG FINISH IN SEPTEMBER 2008.