Doctor Who and the Zarbi: Target Novel Review 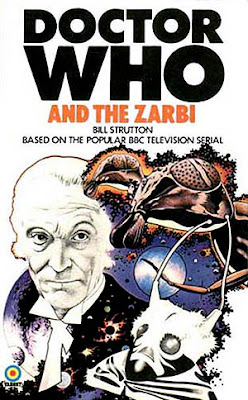 Originally written in 1973, Doctor Who and the Zarbi was the novelisation of the First Doctor adventure, The Web Planet.

The Web Planet isn't and never will be the best Doctor Who story in existence. It's premise is a solid one, an entirely alien planet and the production team at the time were incredibly proud of the sets and costumes. In fact, I suspect that back in the day, it would have been really great as there hadn't been anything like it before. But now, it looks severely dated and looking back with hindsight, it would have worked better as a four part adventure but ended up as a six episode one.

So, with the television adventure not being particularly great, one would expect the novel to expand the onscreen tale and make it excellent.

Alright, I give it some faint praise, it's not bad and does have some good moments. It is worth reading but compared to the other two this book was released alongside, The Daleks and The Crusaders, this book is the weakest. I think the reason for this is because it wasn't written by David Whittaker but Bill Strutton. Whittaker is a fantastic writer while Strutton is a competent one. The book ends up being an example of what they wanted the show to be at a time when it was still finding it's feet. The one thing that really grates on my nerves with this book is that Strutton insists on referring to the Doctor as 'Doctor Who'. When this novel was written he wasn't 'Doctor Who' he was The Doctor. I was glad to find that the audiobook release of this story changed that as reader William Russell was having a hard time constantly referring to the Doctor as 'Doctor Who'.

And I can't give a lot of praise in the characterisations. Whittaker's Barbara is fiery and someone you wouldn't want to cross but here she has about as much character as a piece of cardboard. Ian Chesterton is really dim here and just wants to kill the aliens because they are ugly. He feels like he belongs somewhere else here and Vikki is portrayed as nothing else than a teenager and it doesn't even look like her in the illustrations.

The novel has dated less than the television serial and there is a good villain in Animus. The book is alright and you may end up finding that you are enjoying it. You'll certainly like it. Not a lot, but you'll like it...

DOCTOR WHO AND THE ZARBI, WRITTEN BY BILL STRUTTON WAS RE-RELEASED BY BBC BOOKS IN 2016.