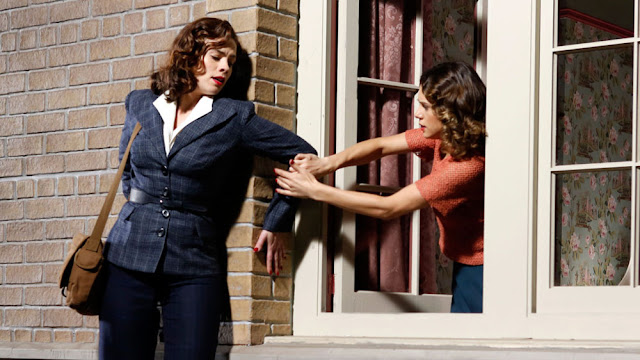 Since the first episode, the series has been heading in darker and darker territories without ever losing it's of humour and fun. It should be a tricky combination to make work but somehow, the writers are doing it with this episode, A Sin to Err, proving to be just that perfect combination. This episode goes from someone stabbing a man and telling him the same is going to happen to all his family to Peggy and Jarvis fighting a load of SSR agents to a really jaunty tune!

It was of course inevitable that at some point Peggy would end up on the run from the SSR given that she has been helping Howard Stark behind their backs and it was great to see that play out in this episode. The fight between her and the SSR agents was fun to watch as was her escape from both Agents Thompson and Sousa.

But, what Peggy wasn't ready for was Dottie, someone who she hadn't suspected being connected to Leviathan. There was something about that scene that I did question and that was why did Dottie kiss her with knockout lipstick laced lips and then go to stab her? Surely if she was close enough to kiss her then she could have stabbed her first? But, it was probably all down to symbolism, the kiss of the Black Widow can be deadly...

Dr. Ivchenko's hypnotism trick was a little bit goofy but in the context of the world that Peggy lives in, it worked well enough to get across what he was trying to do. The reveal that he and Dottie were working together was handled well but why, when Ivchenko was using Morse code did Dottie have to write down that she was to kill Peggy? But with Dottie killing the pervert dentist and Ivchenko making one of the SSR agents walk out into traffic we really get a sense of just how deadly these two are.

What was also nice in this episode was the Peggy/Jarvis dynamic especially in the scenes where they try to work out how many women Howard has slept with. The following scenes were they go and visit those women are extremely funny and Jarvis joining in with the fight between Peggy and the SSR agents was another nice little touch.

Miriam, the woman who owns the Griffth, the apartment block that Peggy lives in, has been a little annoying in the previous episodes she has featured in but here she is really funny particularly in the scenes were she finds out that Peggy has been lying about her job. But the episode really belonged to the character of Angie whose actress Lyndsy Fonseca really excelled in her hilarious scenes were she proved what a great actress Angie really is!