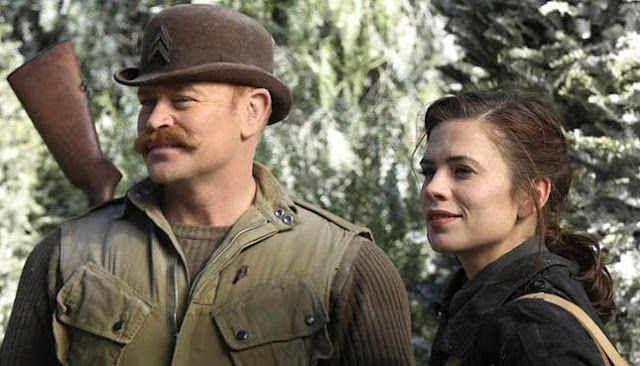 The fifth episode has to be the best episode of Agent Carter so far!

The Iron Ceiling manages to combine fabulous guest stars, an intriguing storyline and plenty of strong character moments and turn them into the best episode of the first season so far...

Surely it would have been easy for the show to spend its run tracking down the various pieces of equipment that Howard had stolen from his vault. And even if it had just been that, I'm sure the show would have worked. But this episode breaks the sort of stories that the previous four had circled about and takes Peggy Carter out of New York and on a mission that explores what else is going on in the background of the show, like who is in charge of Leviathan.

This episode sure has a lot to geek out about including the Black Widow programme and the inclusion of The Howling Commandos which neatly ties the series to the Captain America franchise.

From the last episode, I suspected that Dottie was something to do with the Black Widow programme I also speculated that she might be Yelena Belova, the original Black Widow but it doesn't seem too likely, though that would have been a nice touch. But here the producers of Agent Carter give us some information as to the origins of the Marvel Cinematic Universe Black Widow and we see this through the character of Dottie and as we see, Russia has been training these girls for a long time.

The prologue really said it all, in a nice little move to remind us that Marvel is now a part of Disney, the girls learn English thanks to Snow White and we see a young Dottie fight one of her fellows till she kills her. It is a pretty twisted sequence but its cool to see the Red Room finally being brought to life and the older Dottie handcuffing herself to her bed so she can get a good nights sleep is a cruel but nice touch.

This episode also does a lot of work to completely upend the relationship Peggy has with her male co-workers. After his investigations Dooley learns that Howard Stark was not involved in what we see going on in the series in a nice little scene dominated by actor Julian Glover who played Lionel Luthor in Smallville. It was nice to see Glover back in a show that I watch!

And as for Jack Thompson, someone who has been a particular thorn in Peggy's side for the series so far, this episode does a good job at taking him down a peg or two when he reveals the truth about the events that branded him a war hero, a title he doesn't want. Actor Chad Michael Murray does a good job with material he is given here, in particular the shootout scene towards the end where the character completely shatters.

It was also nice to see the return of Dum Dum Duggan the head of The Howling Commandos. It was a shame that those from Captain America: The First Avenger couldn't join him but we got to see some other names from the comics, so that was alright. What really comes across is how much fun actor Neil McDonough seems to have when he is playing Duggan and his rapport with Peggy comes across feeling completely real thanks to the excellent chemistry he has with actress Haley Atwell!

The only thing that bothered me about this episode was that after the one little girl kills one of the group that goes to infiltrate the facility, no one bothers to talk about it at the end, has everyone forgotten it happened? Or has the strange Russian prisoner they rescued on their mission done something to them?

This episode was funny, thrilling and a terrific episode of Agent Carter. What was really great was getting to see Peggy out of the office and in the field. The inclusion of Dum Dum Duggan and the Black Widow programme was a great surprise and after all this time, the switch up concerning how Dooley and Thompson feel about Peggy was brilliant. But the episode finishes on a cliff-hanger of sorts with Sousa having figured out that it was Peggy who was the mysterious woman reported at each crime scene that had featured in the previous episodes...