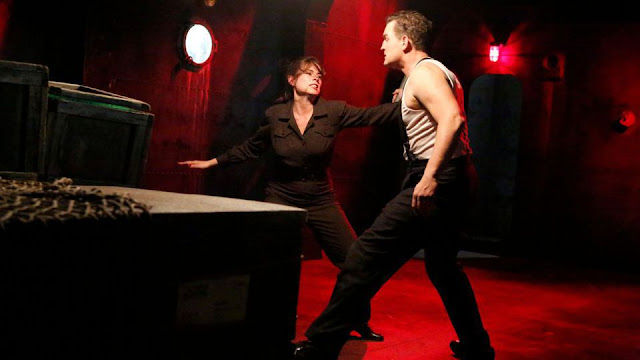 Agent Carter continues on its high with the excellent third episode, Time and Tide.

The first thing I have to say about this episode and the series as a whole is that the humour is really well done and that this episode continued to explore the cool and immersive world that Peggy inhabits. Particular moments I enjoyed with this episode was one of the opening scenes with Peggy and the man who is scaling the walls of her apartment building to meet his girlfriend and the dry way she tells him her apartment is the next one over. Jarvis also gets some great lines including the scene where he explains that the death ray is in Nevada while in the hot seat with the SSR.

Overall, this episode was a terrific one for actor James D'Arcy who is already incredibly likable as Jarvis. He got to something else here where he stood up to Agent Jack Thompson in some of the most tense scenes from the episode. This questioning was followed by some nice little moments between Jarvis and Peggy where he explains how he came to work for Howard Stark and about his dishonourable discharge from the army because of what he did to get his wife Anna to safety.

It was that attempt to get Anna to safety that is nicely mirrored here by Peggy putting her life on the line to save Jarvis when she interrupts the interrogation and makes herself look like she has just screwed the whole process up. We really get the sense that it was already hard for Peggy to get the men in the SSR to take her seriously but this scene makes the weight of her decision to help Jarvis come to the fore because she once again makes herself look incompetent in the eyes of her fellow workers.

And even if it wasn't in a very positive light, it was nice to see the characters of Chief Dooley and Jack Thompson get fleshed out a little more as the office begins to get fully formed. In the last episode the character of Krzeminski felt like the most chauvinistic person you could come across, at one point he tells Sousa that no woman in her right mind would trade in a guy with a shield for someone with a metal crutch. (I will admit, it did take me a while to realise that he was talking about the crutch Sousa walks with and nothing else!)

But in this episode Krzeminski meets his end, in an effective way of making the threat of Leviathan feel more real with Krzeminski and the brutal thug he had in his backseat after having arrested him being brutally killed. Peggy's sadness about his death and her mixed feelings about not having really liked him are a nice little touch.

The thug that is killed let us have some more fun fight scenes. Though I was a little disappointed that when it transpired the tech he was after was something called the Constrictor, that the thug didn't become the Marvel Comics villain, The Constrictor. Personally, I think that would have been a nice little touch.

This episode also sets aside some time to show us Peggy's personal life, in particular, her friendship with her neighbour Angie. Angie is another great character and actress Lyndsy Fonseca continues to shine in every scene. This is mainly due to her excellent chemistry with Haley Atwell and I was glad to see the pair mend the fences that had come down in their little argument earlier in the episode. I really hope they had that schnapps and rhubarb pie that Angie was talking about!

But this episode also brought in a new character in the form of Dottie Underwood, someone who is going to become Peggy's new neighbour. But instantly there is something that is suspicious about the character, she seems to nice, to eager to please. It seems that it will transpire that either Angie or Dottie will turn out to be a baddie but my money is on Dottie but if she works for Hydra, Leviathan or something else, only time will tell.

It is extraordinary that for a show so early on in its run that it has become an inescapable part of the Marvel Universe but I am really liking the way that Agent Carter is being allowed to be its own thing too. Three episodes in and I am hooked, Haley Atwell continues to shine in every scene she is in and this show is quickly coming to top every superhero show we have on television despite the fact the title character doesn't even have superpowers! So far, so good!