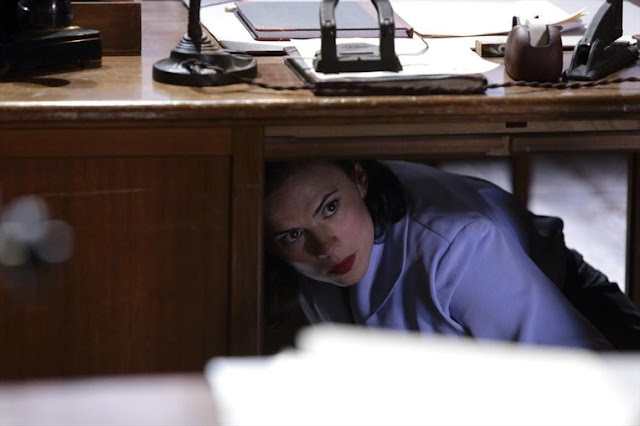 After a fantastic series premier, we unfortunately hit a bit of a stumbling block with the second episode.

Make no mistake, it is still a joy to watch with all the characters firing on all cylinders and visually, its exceedingly impressive but there is something lacking with the plot throughout this episode. And it makes us wonder why they didn't take a leaf out of other television series and do stand alone stories for their first season instead of rushing into a story-arc.

This episode follows closely on from the previous one with Peggy Carter continuing her mission to track down the stolen Stark tech behind her employers backs. Because some of Howard Stark's most dangerous creations have been taken and could prove destructive in the wrong hands.

There are some nice moments, especially when Peggy gets to go undercover and gives Haley Atwell a chance to really shine as she shows off her comedic talents and her fight scenes are pretty good too. In a universe where almost every other character has superpowers, Peggy fights dirty which makes her a lot more engaging as she is a much more relatable character.

Actor, James D'Arcy gets some nice moments as butler Edwin Jarvis. Howard Stark assigns him to Peggy to help her in her investigations, however, they are both keeping something from her and what feels wrong about the situation is that those secrets are also being kept secret from the viewer and as a result, what feels like it should be shocking makes for some boring scenes down the road.

Also, when Peggy and Jarvis remove all the evidence from the explosion at Roxxon in the last episode, because of the investigation from the SSR, the precursor to S.H.I.E.L.D, it leads to an episode where not a lot happens to further the plot.

I hope we get a few more answers to our questions in the next episode, and in a 8 episode series, I hope those answers come sooner rather than later...