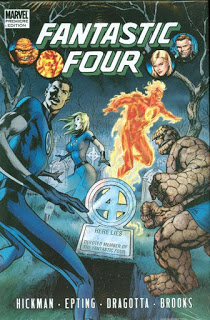 After eight issues of build up, Hickman gives us the payoff in this six issue graphic novel which puts the pieces he laid out into place. Valarie the daughter of Mr. Fantastic and the Invisible Woman finds out about the Council of Reeds and reveals their existence to none other than the Fantastic Four's arch nemesis, Doctor Doom and with that, the final day's of Earth are put into motion.

The first issue in this volume explains why Doom doesn't seem like his usual self here. He had his brain drained and damaged in a recent Hulk story that left him as half the man he used to be. His son Kristoff Vernand is called back to his home by Doom, his exile at an end since the pair had patched their problems up some time ago.

Kristoff Vernand isn't the most noticeable absence in this book, that would be the Silver Surfer who turns up at the end of the first issue to find the dead Galactus from the future. He arrives with the Galactus from the present who demands answers. I have never understood the Surfer/Galactus dynamic as the Silver Surfer constantly wants to get away but the next minute he is the willing herald for the planet eating god. I was surprised to find that Galactus this time didn't want to destroy the earth but that makes him no less menacing to find him hovering above New York in the way he does in these pages.

Yet another thread of the plot is the temporary cure for the Thing. He is given a liquid cure that, should it work, would revert him back to his human form once a week every year. I have always enjoyed the brotherly relationship between the Thing and the Human Torch so it seemed right that it would Johnny Storm who took Ben Grimm out and about like normal people for the first time in a long time. I particularly liked the panel where the pair appeared to be having dinner with Fantastic Four comic creators, Stan Lee and Jack Kirby! It was also nice to see some other well loved Fantastic Four characters pop up during these scenes including Ben Grimm's on/off girlfriend Alicia Masters and his "enemies", the Yancy Street Gang.

It is somewhat predictable that Ben Grimm picks the wrong week to give up his powers as there are a number of situations that occur throughout the book that he now can't properly fight in. The arrival of Galactus being one.

The final plot thread is a little dull but it is fun to see the Susan Storm/Namor dynamic once more. Sue escorts Namor to a meeting which she hopes will unite every empire under the sea. Of course things go wrong and Sue ends up being given the role of head of this alliance. Of course, Namor being Namor he isn't known for keeping a cool head so Sue decks him one but I still like how he becomes a sort of crazy stalker whenever he is around her!

The second part of this book features Annihilus attempting to invade the earth again this time using the Negative Zone portal in the Baxter Building, home of the FF's, headquarters. This means the return of Anti Life Preacher, who appeared in one of the earlier volumes and his force of insects. I must admit I didn't really understand his involvement in the whole affair but there we go.

Artist Steve Epting's artwork is beautiful as ever. His depiction of Alex Power's abilities look really good and he makes it look like he has a really powerful superpower which he does, if only writers used this character more. I was also pleased to see, Galactus's power dots return in a tribute the artist Jack Kirby!

The whole story he is called "Three" but is more likely to be know as "The One Where Johnny Storm Dies". Marvel teased a death in this team for months before the actual event and I was impressed to find writer, Jonathan Hickman put each member of the team in a situation where they might actually die. Reed is stuck with Galactus, Sue is trying to stop a war between underwater forces, Ben is powerless and Johnny is alone in his battle against Annhilus's forces.

Despite, in my opinion, being really underused throughout Hickman's run, this allowed Johnny some much needed characterisation and he goes out with an impressive self sacrifice to protect every child in the Baxter Building. There is no denying that Johnny's death is brutal and the fact that Ben is one to see it and not the reader is enough to tell us what is going on and a little hint that things might not be as they seem.

Another shocking sight in this book is the return of Franklin's powers. Franklin is the son of Reed and Sue and I think he has mutant abilities or something that they thought had gone. But it turns out that Leech, a character who has been around a long time in comic books has been bunking with Franklin in an attempt to stop him accessing his powers. It is Leech who asks to be knocked out so Franklin can get those powers but Johnny dies so that Franklin doesn't go overboard with his abilities.

The final issue is almost dialogue less and is more interesting because of it. It does slightly feel like cheating, like the author couldn't think of what write but it makes the issue the most effective of the whole volume. I particularly like the fight between the Thing, Thor and the Hulk where Thor and the Hulk try to get the Thing to confess that he isn't as alright as he has been trying to let on. There is another effective tear jerker at the end of that issue between Franklin and Spiderman, Johnny's friend. This segment is drawn well by Mark Brooks.

This volume is a great end to Hickman's run where he ties up the plot threads he has carefully put into place across the other volumes. But the question is, when a character dies in comics is how long will it be before The Human Torch comes back?

Not long as it turned out...