Doctor Who: The Jupiter Conjunction Review 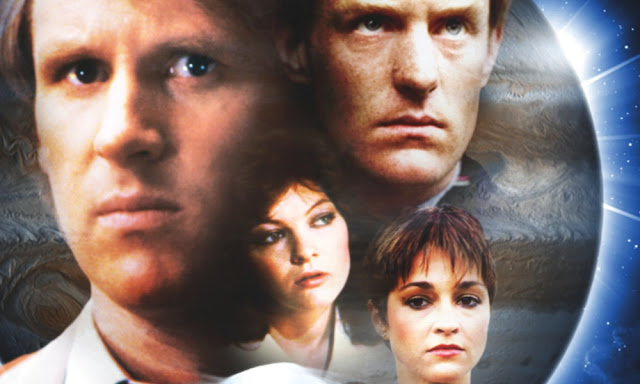 Author Eddie Robson's script feels like it has been inspired from moments in history when various agencies had manipulated events or disasters so they had the desired outcomes. That was certainly what I got from listening to The Jupiter Conjunction. This is a story that seems to divide fans, some people really like it while others don't. I'm pleased to report that I am someone who does like this story, even if I wasn't expecting too.

The action for our heroes, the Fifth Doctor, Tegan, Turlough and Nyssa takes place on an asteroid travelling through our solar system. The TARDIS arrives in the middle of a giant shopping centre much like the one in Dragonfire. It is not long before the crew are split, Tegan and Nyssa go shopping and the Doctor and Turlough are arrested. It usually bugs me when the crew are split this early on but it didn't really bother me too much here as it works really well for the story. Tegan and Nyssa help a woman they meet thieving something from a clothing store, the Doctor and Turlough have to prove their innocence.

Mark Strickson as Turlough puts in an excellent performance and managed to make this listener believe that Turlough had turned on the Doctor. Of course this was all a ruse to give them a chance to escape but it wouldn't be too far out of the realm of possibility when it comes to Turlough and Mark Strickson plays it really well.

Equally as good are Janet Fielding and Sarah Sutton as Tegan and Nyssa. They soon find themselves out in space on the surface of the asteroid and the pair continue to give performances that firmly make them my favourite companions. Thanks to Big Finish Tegan is no longer a 'mouth on legs' and has really evolved more than she was in the television series. This older version of Nyssa, though she looks like she did when she originally with them on television has also been well developed thanks to Big Finish and it is a testament to both actors who really bring these characters to life!

As usual Peter Davison gives a fantastic performance as the Doctor and even though Davison is older than he was in the television series never does he show his age through his voice. He sounds exactly like he did on the telly!

The monsters here are also well realised thanks to the great script and voice work from Philip Pope as well as great sound design which we have come to expect from Big Finish.

The only quibble I have here is that sometimes the guest stars stray into pantomime acting every so often which both spoils the story and their characters.

THE JUPITER CONJUNCTION, WRITTEN BY EDDIE ROBSON AND STARRING PETER DAVISON, JANET FIELDING, MARK STRICKSON AND SARAH SUTTON WAS RELEASED BY BIG FINISH PRODUCTIONS IN MAY 2012.