Doctor Who: The Fate of Krelos Review 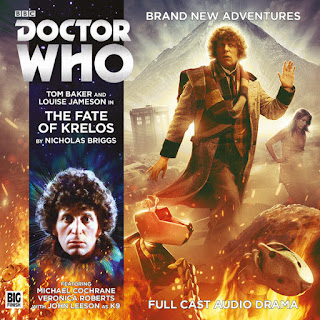 If we think back to City of Death for a moment and remember all that wonderful dialogue about France having a bouquet like a fine wine and how the bottle has to be opened to be allowed to breathe before consumption so it tastes better, in the case of this story, Nicholas Briggs takes on the role of oenologist and sommelier and crafts an excellent vintage with episode one, gives it just the right time to breathe in the early stages of episode two and then pours some more of the excellent vintage in the final closing moments of The Fate of Krelos, the best story he has ever written for Big Finish.

The story starts out as a light hearted adventure with The Doctor and Leela enjoying a fishing trip on the planet Krelos before it gradually gets more and more sinister.

What really helps this story is the relatively small cast, Tom Baker, Louise Jameson, John Leeson, Michael Cochrane and Veronica Roberts. And while Baker and Jameson get the most to do, the tension continues to mount until the final moments of the play when...well, that would spoil the story for you wouldn't it!

Krelos is a world that has reached total connectivity with everything connected together as announced proudly by the Mayor of Krelos City. While enjoying their fishing trip, the Doctor and Leela meet Geralk or a robotic form of him anyway, enjoying reliving his youth.
Meanwhile, something is going wrong with the TARDIS, K-9 has been interfacing with it and the console room reverts back to how it looked during the Second Doctor era and K-9 begins to act more and more strangely.

As the play continues the threat level shots up to eleven and you do get a sinking feeling when the end arrives and the threat becomes apparent. Long time listeners of Big Finish and Doctor Who fans in general will get what is going on pretty early on but it doesn't spoil the enjoyment.

The performances are spot on and we get excellent, as usual, from Tom Baker as the Doctor and Louise Jameson as Leela. However, the stand out performance award has to go to Michael Cochrane who plays Geralk so well that we generally do see what his life has been and is like, Nicholas Briggs really does have the characterisation spot on for this character.

Not to mention the cliffhanger at the end of episode two which promises for more to come!

THE FATE OF KRELOS, WRITTEN BY NICHOLAS BRIGGS AND STARRING TOM BAKER, LOUISE JAMESON AND JOHN LEESON AS K-9 WAS RELEASED BY BIG FINISH PRODUCTIONS IN JULY 2015.