Doctor Who: The Butcher of Brisbane Review 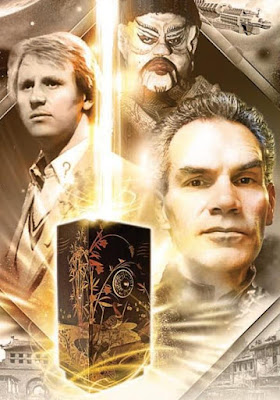 Its something that has been tried before.

Trying to make a sequel to some of the most loved Tom Baker stories using the Fifth Doctor. Very rarely is it pulled off well because the two eras of the show have completely different tones. It had been done with the BBC Books, Warmonger did it with The Brain of Morbius and Zeta Major did it with Planet of Fear, neither were startling results.

So what happens when the best loved Doctor Who stories of all time, The Talons of Weng-Chiang and attempt to make a sequel or in this case a prequel to it? Surely it would backfire spectacularly. But it doesn't. In fact, its absolutely fantastic!

I think the reason that The Butcher of Brisbane works so well is because it is a sequel. It takes some of the almost throw away lines towards the end of Talons and welds a story around them. As is usual with these stories feature the Fifth Doctor, Tegan, Turlough and Nyssa, they are split up quite early on and when Nyssa and Turlough are sent into the past thanks to something to do with time, the Doctor and Tegan end up at the right point in time, just three years later.

Tegan is immediately distraught as she realises that the TARDIS has landed in the ruins of her home Brisbane. Actress, Janet Fielding, delivers these scenes wonderfully, but rather than letting the sadness of seeing her destroyed home eat away at her, Tegan channels all that pain and hurt and becomes one the main driving forces of this story not afraid to get her hands dirty in the process. Janet Fielding never ceases to engage the listeners and here is certainly no different.

Peter Davison delivers another fantastic performance, pitching it just right and he adopts a new sort of companion in this story, a mutated Dingo called Chops. Chops is another great invention in this script and works a more intelligent Mr. Sin.

Mr. Sin also puts in an appearance though not much is heard from him. I think that was a good idea because the visual appearance of him was so grotesque that it was only something that could be conveyed on screen and unless he could talk, he wouldn't work well on audio.

Angus Wright is also great as Magnus Greel, a man who is already unhinged throughout the story but gradually begins to lose it as the story progresses and one is forced to wonder that had the Doctor and his companions not arrived in Brisbane, would the events in Talons been set in motion? Would the Fourth Doctor and Leela have gone back to Victorian London, would they have ever met Jago and Litefoot?

This is my only quibble with this story. One of the reasons Talons works so well is because of Jago and Litefoot though there are no characters that compare to that pair that the Doctor Who fandom loves so much. The story is a little too political to include those two characters and I understand that but I for one would have loved to hear them once more!

But the story really belongs to Sarah Sutton and Mark Strickson who play Nyssa and Turlough. From the moment they arrive on those snowy mountains in episode 1 you know they are in for a bumpy ride. While Nyssa manages to infiltrate Greel's people and eventually becomes his fiancé, Turlough is forced to become her secretary, though he really gives any information he finds to Greel's enemies and one gets the sense that Turlough enjoys this. Both actors performances are brilliant, though it perhaps Sarah Sutton who really excels in this tale.

Sometimes, prequels and sequels to much loved Who stories don't work. But The Butcher of Brisbane is one of the rare occasions when everything falls wonderfully into place and it does work. I can't recommend this story enough!