Doctor Who: 1963 - Fanfare for the Common Men review 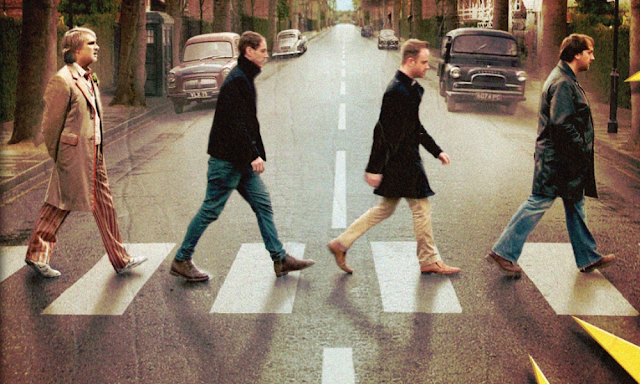 In September 2013, Big Finish kicked off their anniversary celebrations for Doctor Who's fiftieth anniversary with Eddie Robson's, Fanfare for the Common Men. What should be evident to any hard-core Who fan such as myself, this story takes a scene from the first ever Doctor Who story where Susan, the Doctor's granddaughter is waiting for her teachers, Ian and Barbara listening to a song by The Common Men on her transistor radio and weaves a story around the mysterious band!

Fanfare for the Common Men starts with the Fifth Doctor taking Nyssa to see The Beatles only to discover that no one has heard of that hugely famous band. Instead, The Common Men are the biggest hit in 1963 so the Doctor and Nyssa travel up and down their timeline to try and discover what has happened. I've never been too taken with The Beatles if I'm honest, I don't get them like I do other musicians so my knowledge about them is virtually non existent, however, what is particularly clever about this story is that their story is used as the story for The Common Men to appeal to fans of The Beatles while informing people like me about them. While Nyssa becomes trapped during the band's beginnings in Berlin in the early sixties, the Doctor follows their career forward through their timeline as they become bigger than The Beatles.

The story that follows is a fun and enjoyable adventure which perhaps is unassuming in its ambition but is typical Robson goodness who makes his second contribution to the main range of audios, his first being The Jupiter Conjunction. The tangled plot is interesting if a little confusing. I never got bored or felt it predictable, in fact, I had no idea what was coming next but I won't pretend I understood it all. I think this is a story that requires a few listens to really get everything out of it.

The performances are great too. Peter Davison as the Fifth Doctor gets to be delightfully enthusiastic about The Beatles, with Davison stating in the interviews at the end of the story that he is a big fan of the Beatles and Sarah Sutton's Nyssa continues to shine especially in stories like this, where her character is put into situations a little out of her league and allows her to demonstrate just how competent she really is. The guest cast are also excellent in this with Mitch Benn, Andrew Knott and David Dobson playing the Common Men themselves, Mark, James and my favourite Korky. Not only do they act but also sing when it is appropriate. These characters are really well used and particularly sound like the Beatles in their interview segments which lace the storyline together.

Ryan Sampson is also great as Lenny Kruger who is a little stereotypical but that is what the script really calls for. Jonty Stephens is enjoyable as Paravatar who is a sixties stereotype but that stereotype is turned wonderfully on its head by Stephens. But my favourite guest performance in this is Alison Thea-Skot who plays Rita, amongst others. Rita is one of the characters lucky enough to be dragged into the Doctor's world and she would be great companion material as she is plucky and independent.

As you might expect for a story about a band, there is a number of musical numbers and the sound designer, Howard Carter really rises to the challenge, creating a number of original songs for the Common Men which are not only catchy but enjoyable enough to be plausible and put in a full appearance in the CD extras at the end of disc 2. Carter not only excels himself at the songs but the entire musical score is great really emanating that sixties vibe that lets us get a feel for that decade.

All in all, Fanfare for the Common Men is one of those pick me up stories that a range that has been going as long as the Doctor Who audio range has been, needs once in a while.

FANFARE FOR THE COMMON MEN, WRITTEN BY EDDIE ROBSON AND STARRING PETER DAVISON AND SARAH SUTTON WAS RELEASED BY BIG FINISH PRODUCTIONS IN SEPTEMBER 2013.