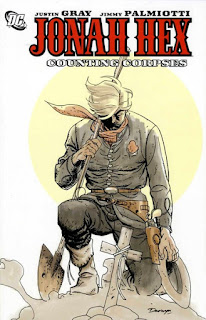 This collection starts off with The Hyde House Massacre and I really enjoyed the first half of it as it ran almost like a silent comic which was a real treat as it allows us to enjoy the artwork from Paul Gulacy. His art carries well overall with all the transitions being really clear and the action clear to follow even with the lack of sound effects. But the second half of this issue runs more along the lines we expect and even ends with Hex riding off into the sunset which he seems to do in every issue. My main concern with this issue is that there seems to be an inconsistency between the artwork of male and female characters. The main female character's face doesn't seem to be part of the illustration at times. All the male characters are coloured with dark shadows but her face and body isn't and sometimes it looks like someone cut and pasted her into the panel.

The second story, The Great Silence is illustrated by Darwyn Cooke and out of all the issues in this book is by far the most memorable and may take by surprise as Cooke's cartoon-like drawings really set the reader up for a fall. And coupled with some of the funniest scenes we have ever seen in a Hex comic, particularly the one with the man coming out of a toilet with a canon pointing at him, Cooke was the perfect choice for a issue with this amount of comedy involved. It is the juxtaposition that makes this story really memorable as the darker, grittier art style the rest of the book has just wouldn't
have worked with this story.
While this story might not be accessible to those who aren't familiar with the characters, the art and comedy makes for a good breath of fresh air in the dark universe of Jonah Hex.

The next story is The Diving Rod. The story features artwork from artist Jordi Bernet and it seems that Hex can't catch a break even when he travelling through swamps when he is attacked by a group of hillbillies. In the last Jonah Hex review, I moaned a little about Bernet's art style but it seemed to really suit this story. Bernet seems particularly adept at portraying mood through his character's expressions and his cookie cutter/hair change women aren't as noticeable here as there is only one female character in this story.

You'll Never Dance Again follows Hex as he sets a trap for a group of train robbers. This issue is pencilled by Billy Tucci, someone who I hadn't heard of before but I really liked his art style. His art is soft and he pays attention to slightest of details, in particular hands and any marks on pistols not to mention the detail on the lovingly crafted train. The main female character in this issue is my one issue because she seems to have boobs that can inflate and deflate with ease! Another note to this story is the way he fluidly portrays the violence and I look forward to seeing more from this artist again.

The final story, Shooting Stars sees Jordi Bernet return to pencilling duty and features the return of some old Hex characters most notably The Star Man. The story itself is realitivly light weight with some bounty hunting mix ups and enjoyable interactions. There is nothing too dark or funny here but that is what I have come to expect from Bernet and the writers.

This book doesn't break any new ground and the mould of a Hex tale but it is enjoyable, even if it is read the once as most of the stories in this collection are largely forgettable. Sorry. It also told me not to read lots of Jonah Hex in one go as one gets used to the same old, same old formula on display here. That's not to say that I'm not looking forward to my next adventure in Jonah Hex land it is just that the collection of stories here are pretty dull compared to what I've read before.