Doctor Who: Shield of the Jotunn Review 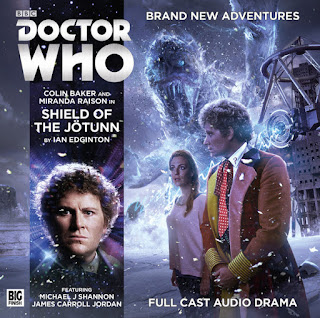 The first thing I thought when I had listened to Shield of the Jotunn it is that simplicity certainly doesn't equate to poor story telling. This story is a very traditional Who-type story, set in a base under siege scenario. It has all the basics of this trope that we have seen or heard many, many times before yet this story never gets boring.

Set in the not too distant future in the year 2029, Mankind is fighting a war against pollution and the consequences of what they have allowed to happen to planet earth. When a prototype terraformer is put into action in the Arizona dessert, the workers make a shocking discovery, there is a Viking burial ground filled with dead bodies and a time lord with a bright coat.

Author Ian Edginton is to be praised, he really plays with expectations here. While the story gives us the traditional mix of characters, you will surprised by how their roles are often reversed or how often those roles are switched. Even the villains have an interesting twist given to them, while they are unrelenting brutes their reasoning behind why they are these brutes allows for the listener to feel sympathy towards them.

The pacing is also excellent here and unlike most of the Matt Smith era of the show, the story doesn't race into the action. The story takes its time but never lets events drag on. Often this works in the story's favour as it allows the listener to wonder where it is going to go next but never goes so rapidly past that it makes the listener wonder about just what it is that is going on.

Overall the voices and acting are great, there are some moments when the American accents stretch the imagination as they sometimes sound more like impersonations than actual accents. Some of the sentences have a habit of becoming completely unintelligible. Don't let that spoil the story for you but expect to find yourself raising your eyebrows at certain points.

Ultimately, Shield of the Jotunn is great piece of work that keeps the listener invested in the story throughout, with great writing and great acting this story is a highly recommended one for both fans and people looking for a great story in which to jump onto the Big Finish bandwagon.

SHIELD OF THE JOTUNN, WRITTEN BY IAN EDGINTON AND STARRING COLIN BAKER AND MIRANDA RAISON, WAS RELEASED BY BIG FINISH PRODUCTIONS IN DECEMBER 2015.