Doctor Who: Embrace the Darkness Review 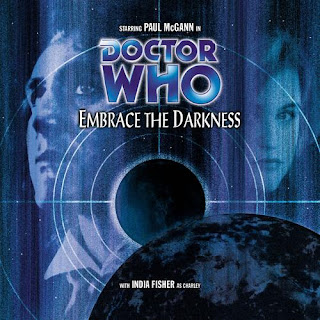 The Doctor and Charley arrive in the remote Chimmerian System on a mission to unravel the mystery surrounding its sun. But they soon find that darkness has embraced the scientific base on Cimmeria IV in more ways than one. In a fight for his survival, the survival of Charley and the lives of the crew on the spacestation, the Doctor must use all his wits against a deadly artificial life-form and an ancient race whose return to the Chimmerian System threatens suffering and death on an apocalyptic scale...

The thing to understand about audio dramas is that they take place solely in the listener's mind. It is the job of the writers, directors and actors to really put those images in our heads and everyone will imagine the story differently. One person will imagine the space station will look one way when another will imaging it will look completely different.

So, what happens when the story is set in virtually, pitch black darkness?

Embrace the Darkness attempts to do something that audio book companies have never done before, set an interesting adventure in near darkness. When we first meet the excellent cast of characters they are cowering from the light and embracing the darkness. However, as the story goes on it quickly becomes rushed, the story hurrying to it's climax that gradually ceases to make any sort sense and gives a happy ending, the sort that only happens in fairy tales, that really goes against the dark tone the rest of the story had.

The story kicks off with the Doctor not happy to find a gaggle of Time Lords travelling through the vortex and considers if he should help them. Deciding against it, he decides to find out what happened to the Chimmerian sun. Millions of years ago, the system suddenly went dark. Millions of year later, a group of miners prepare the planet of Cimmeria IV for exploitation. Setting up a series of emitters which will cast light onto the planet and throughout the system for the first time in millennia. When they power up the emitters, they are attacked and in moments the three miners find themselves in complete darkness unable to see thanks to the complete lack of light. Of course, its not quite as simple as that.

The Doctor gets himself and Charley caught up in the rescue attempt headed by the intelligent computer ROSM. Deciding Charley is a health hazard to those he is trying to rescue, ROSM designates Charley a threat and tries to kill her. She escapes in a life pod only to find herself arriving in the mining facility where she comes face to face with the miners who, are not only blind, eyes are missing, stolen from their sockets. This leads to a great cliffhanger at the end of part one which keeps the listener interesting in part 2. It is just a shame that from there the whole thing slowly starts to fall apart.

You can't call Embrace the Darkness a base under siege story. It is more like a get the hell out of this base story because the Chimmerians still exist. They are small grey creatures that are the size of children who abhor the 'taste' of light and instead try to embrace the darkness, a saying they repeat time and again. They are one of the good things about this story as their motives initially play out as malevolent and evil but really they are trying to help the miners and the Doctor and Charley to survive and we find out why at the end of the story. They are aliens that stand out in the pantheon of Who as they are a race of healers who want nothing more than to help people unlike the Cat Nuns seen in the Tennant era. In fact, if they don't heal people it can kill them, this leads to an interesting and different take on a 'villain' who isn't really a 'villain' at all. 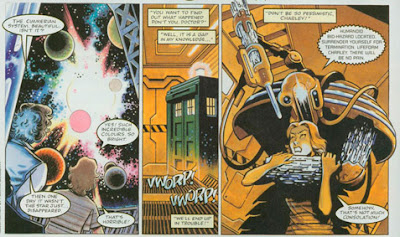 Once again, Paul McGann is really enjoyable as the Doctor, his Doctor being given a chance to shine in this story thanks to his separation from Charley in episode 1. We get to see how clever this Doctor is and although this story was written years before the stupid Time War idea that I don't like, we see the seeds of doubt that the Ninth Doctor suffered from, be planted at the end of this story.

Charley is also separated from the Doctor and this once again allows actress India Fisher a chance to shine. She is really enjoyable as Charley and quickly throws herself into the action in the story and doesn't take any nonsense from anyone including the Doctor. While the Doctor tries to save Charley from ROSM, Charley is quite willing to throw herself in danger to save the Doctor and isn't afraid to take him down a peg or two. The Doctor and Charley are willing to put their lives on the line for each other and this is continually evident here. Its a great friendship.

The outstanding performance from the guest cast comes from Ian Brooker who plays the computer ROSM, who, for a supposibly intelligent machine, can be really stupid at times. There are moments when you expect ROSM to go crazy but its literalness becomes a roadblock for the characters.

I think that something that doesn't help the story is the unusually bad sound design. It goes from being really quiet to really loud in a matter of seconds and is often a distraction from the story, making the listener focus more on the sounds than the actual story unfolding around them.

Where the story really falls short is the script. It could have done with having several minutes chopped off and the ending tweaked and reworked to something that really made sense and was in keeping with the overall tone of the story. The beginning of the story rattles along at a real pace that keeps the listener invested in the story but gradually, thanks to the rapid storytelling which glosses over everything that would make it great, it falls short of being truly great. Still it is a nice story if you want to hear the friendship between the Doctor and Charley that continues to blossom.

Overall, Embrace the Darkness moves a little too quickly for anyone to really keep up with it and ends up feeling like a bit of rushed mess that could make no one want to embrace this story again...

EMBRACE THE DARKNESS, WRITTEN BY NICHOLAS BRIGGS AND STARRING PAUL MCGANN AND INDIA FISHER WAS RELEASED BY BIG FINISH IN APRIL 2002.