Doctor Who: The Dark Flame Review 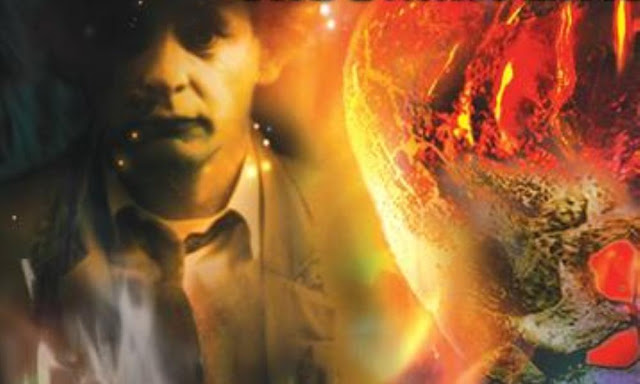 Receiving a message from her old friend Victor, Bernice Summerfield heads to Orbos to meet him only to find that he never turns up. So, she sends a message back to the Doctor to pick her up. On the way to collect Bernice, the Doctor and Ace are intercepted in the time vortex by a telepathic message from the Doctor's friend Remnex warning them to beware the Dark Flame before they hear his dying scream. The Doctor and Ace arrive on Orbos to find Remnex is alive and well and completely unaware of sending any telepathic message.

It doesn't take long for things to go to hell. The Doctor is deeply worried about the temporal damage that is being done by the black light experiments the crew of Orbos is conducting. Bernice's friend Victor is on the planet below looking for a skull and being used for forced labour. Remnex gets murdered and Professor Slyde is determined to put the blame on either Bernice, the Doctor or Ace. But why was Remnex killed, why is the skull Victor is being forced to uncover so important and what does all this have to do with the cult of the dark flame, a cult thought long dead?

When this story first came out there was some backlash from the fans of Big Finish. The two previous years had seen the first Seventh Doctor/Bernice Summerfield/Ace story, The Shadow of the Scourge and that had been followed by Bang-Bang-A-Boom, featuring the Seventh Doctor and Mel. Suddenly, along comes a more sombre Doctor for no apparent reason and he is traveling with a post Survival Ace. This story came out long before Big Finish placed their plays in some continuity from the television series.

This isn't a story that could be continued. Its not the type of story that can be completed by buying another release. And rightly so as what didn't fit then is just downright problematic now. I think where the problem lies is that this story is set during the virgin novel era after the television series was cancelled in 1989 and is a lot more darker in tone than the television stories to tie in with the tone of the novels. That, I think, was the wrong decision. It would have been a much better story had it been set in television continuity.

While the story isn't necessarily a bad one, it is easy enough to pass it off as a Doctor Who adventure from another universe much like the Unbound releases. The problem comes from when author Trevor Baxendale decides to tie the story in with the Virgin releases and he links this story's future to theirs. The problem is, those novels have been out of print for years...