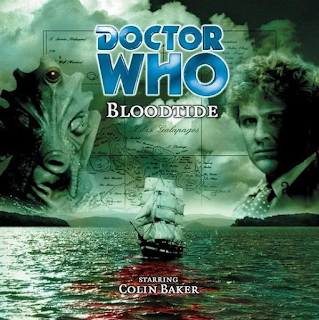 Prehistoric Earth is dying...
With thunderclouds rolling across th skies covering the land masses in complete darkness, the seas crash and boil and rain slowly turns to acid. The remnants of the Silurian race are placing themselves in suspended animation, deep below the surface of the earth.
One day, they will reawaken and reclaim the world which is theirs.
The TARDIS lands on the Galapagos Islands, a desolate outcrop of rocks shrouded in mist and fear. In the settlement of Baquerizo Moreno, there are rumours that the prisoners are mysteriously disappearing from the gaolhouse. A local fisherman is driven insane by something he saw in the nearby caves and the Doctor and his companion Evelyn are not the only new arrivals on the islands, there is a young natural philosopher by the name of Charles Darwin...


I do like the Silurians. I think they are an interesting Doctor Who monster, who, while not monsters per se, have done horrible things to the human race who succeeded them. Not only do we have the Silurians who appeared in the second Jon Pertwee story, Doctor Who and the Silurians, we have their cousins who appeared in another Pertwee adventure called The Sea Devils. These are the only two stories with these creations that haven't suffered from various events or events in the stories, Warriors of the Deep, the next story with both creatures and Peter Davison's Doctor suffered because of the surprise election of Margaret Thatcher that left the BBC scrambling for studios and The Hungry Earth/Cold Blood, suffered from Rory's sudden 'departure'.

Bloodtide doesn't suffer from many issues thankfully and gives us a second enjoyable adventure that features the Silurians a truly interesting creation. What it does do however, is not make full use of Colin Baker's Doctor and leaves companion Evelyn played by Maggie Stables behind in the story telling.

It's 1885 and the HMS Beagle is anchored of the coast of the Galapagos Islands. The Doctor lands the TARDIS on the islands to let Evelyn meet one of her scientific idols, Charles Darwin. When Doctor Who does historical story's the overriding story line is not interfering with history and this story doesn't break suite from that with the Doctor constantly reminding Evelyn not to influence Darwin in anyway, he has to be allowed to make his discoveries for himself. However, this hampers the character of Evelyn. The scenes between Colin Baker and Maggie Stables are really enjoyable though the rest of the story doesn't really make good use of either of them. We do get a good scene where Evelyn manages to outsmart one of the Silurians in the final episode but apart from that, she is sadly put to one side throughout the course of the story. 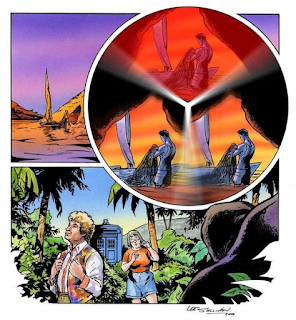 Despite not being used a lot, Colin Baker continues to shine because he is getting a better treatment from these audio stories than he did in the television series. He is a joy to listen to.

Maggie Stables likewise, is a joy to listen to. I really like her character and she is a great companion for the Sixth Doctor and doesn't take any nonsense from him. What is really sad however, is when we listen to her now, we are reminded that the glorious Maggie Stables sadly passed away a few years ago and we will never get any more stories with these two.

The supporting cast are also slightly let down by playing characters who just aren't interesting. Even Charles Darwin isn't that interesting though his scenes with Evelyn are the highlights of the story with his gradual dawning about evolution.

The Silurians get a lot of love in this story more than they got in their later stories from the television stories. They make their first Big Finish appearance here and are made a lot of in this story and we can tell from listening to this adventure that author Jonathan Morris really likes them. He manages to once again elevate them to a credible threat.

But the story falls somewhere and we lose the energy we had at the beginning of the adventure and it goes out with more of a whimper than a bang...

BLOODTIDE, WRITTEN BY JONATHAN MORRIS AND STARRING COLIN BAKER AND MAGGIE STABLES WAS RELEASED BY BIG FINISH IN JULY 2001.