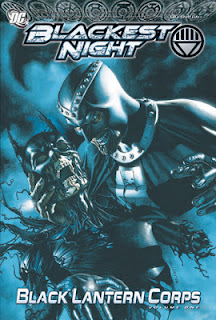 Not having any idea what happened in the rest of the Blackest Night storyline, I came to this book not knowing anything. I came away, having my interest piqued though I found myself drawing comparisons between this and the X-Men storyline X-Necrosha. But none of these limited series that are reprinted here, actually come to anything. And I'm sure that if you read the whole saga, this would be the book that is entirely skipable. I'm sure that the main selling point of this book was the chance to see old favourite characters who had been killed off in the comics come back to life. But the problem is that none of this characters are recognisable as none of them retain their original personalities.

The book kicks off with the 3part Batman story. I'm sorry to say that it was completely unremarkable. I also noticed a few mistakes with this book. Artist, Adrian Saef, gets Robin's costume wrong, new Robin Damien, is drawn in Tim Drake's old costume and author Peter Tomasi just can't get New Batman, Dick Grayson or Damien's voice making Batman come across as too gruff and angry and Damien is too weak. And he lets guest star Deadman do something that I'm not too sure he could do before which is see the life of whoever he takes over. And the whole thing ends up feeling like a bit of a muddle.

The Superman stories fare a little better, and author James Robinson manages to make all the characters sound and feel like their characters. He uses the Earth-2 Superman, Lois Lane and Psycho Pirate as the main antagonists. It was nice to see Krypto also included as one of the heroes here defending Martha Kent. I feel the author missed a trick here, if every dead character is coming back to life, why doesn't Jonathan Kent? I think that a meeting between him and Martha would have been really good. While the main story focusing around Superman, Superboy, Krypto and Martha Kent is surprisingly enjoyable, I didn't like the Supergirl part of the story mainly because it wasn't really developed in the same way that the Superman story was. All they did was put a force-field up, not much else came of it. That was a shame because that should have either deserved its own miniseries or further development.

Perhaps the biggest problem I have with these two stories is that both of them end on the same "let's join the fight," note and neither bring nor give to the crossover event as a whole. The villains themselves are completely one dimensional, Dick shows no emotion when faced with the villain Blockbuster and Superman isn't even sure if Earth-2 Superman is even real. Ultimatly though both these series end up as nothing more than an over stretched fight scene.

The best story on offer here is The Teen Titians arc. It allows Beast Boy to accept is complicated feelings for dead girlfriend Terra. However, the problem with this story lies in the fact that nothing happens here that isn't explained in the actual miniseries. Dove has some sort of effect on the Black Lanterns and this story ends on a different "Let's join the fight!" note.

But the strength of this story lies in the scenes between Donna Troy and her dead husband Terry and their son Robert. This is obviously one of the toughest fights in the story finally because it has a proper emotional connection between characters and the scenes where Donna 'kills' her dead husband and baby are quite shocking and sad. I found myself surprisingly feeling sorry for her.

Blackest Night: Black Lantern Corps Volume 1 is skipable if you are looking for a book in the crossover to not get. There is nothing new here that isn't ever explained or explored in the main story but, if you are new to this crossover, it is an excellent jumping on point!