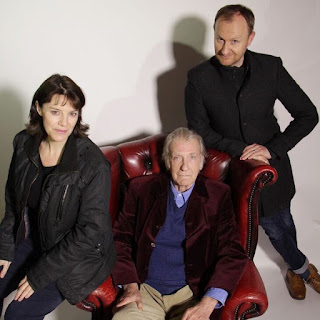 This summer, Bernice Summerfield returns in a brand new box-set – but not with the Doctor she was expecting! David Warner is the Doctor!

National treasure David Warner (Time Bandits, Tron, Star Trek, Titanic, The Omen, Doctor Who: Cold War and one of the definitive stage Hamlets) will be reprising his role as the Unbound Doctor in a box-set of four new full-cast adventures featuring the first lady of Big Finish, Professor Bernice Summerfield (Lisa Bowerman).

David first appeared as his Doctor in two Doctor Who Unbound audio plays – Doctor Who: Sympathy for the Devil and Doctor Who: Masters of War – portraying an alternative version of the Time Lord's Third incarnation. But this Doctor is one who is cautious to make sacrifices; a choice which had led his universe down a dark path.

Also returning is Mark Gatiss playing Sam Kisgart playing The Master. 'Kisgart's Master originally featured in David Warner's first adventure, Sympathy For The Devil, and we couldn't leave him out of this boxset,’ explains producer James Goss. ‘We contacted Mark, who said that Sam would be available. Well, once panto season was over.’

Doctor Who – The New Adventures of Bernice Summerfield Volume 3: The Unbound Universe will see the universe's greatest archaeologist recruited by the Doctor for a mission to his parallel dimension – where together they set off to explore the aftermath of a disaster that has laid waste to reality. Benny and the Doctor will face the Kareem, the Blanks, Unicorns and the Sisters of Saint Beedlix – as a terrible truth awaits them at the end of reality.

'We were trying to work out where we could take Benny next,' says James, 'and the idea just sort of happened. We immediately got very excited about it. David Warner is a legend, and his Doctor is the perfect foil to Lisa Bowerman. Whereas Benny is a famously gung-ho adventuress, he's a cautious man with a twinkle in his eye. She falls into his universe and gives him a new lease of life.'

'We were very lucky with the guest cast – we've a wealth of national treasures. Not only do we have David Warner, we've got Radio 4 newsreader Zeb Soanes; we've Dr Gillian Magwilde herself – Julie Graham.’

The series has been directed by long term Benny-associate Scott Handcock:
'Lisa and David have a brilliant chemistry – it's a very different Doctor/Companion relationship,' said Scott. 'Benny really is the adventurer, dragging the Doctor along behind her. When we first meet him, he's given up all hope – but Benny is determined to, quite literally, save the universe. The guest cast are marvellous – it's a hoot. Kisgart has never been more sinister.'

Doctor Who – The New Adventures of Bernice Summerfield Volume 3: The Unbound Universe will be released in August 2016. You can pre-order your copy today for just £20 on both CD and to download. And remember, when you choose to buy this release on CD directly from Big Finish, you will also unlock instant access to a digital copy for download.