Doctor Who: Prisoners of Fate Review 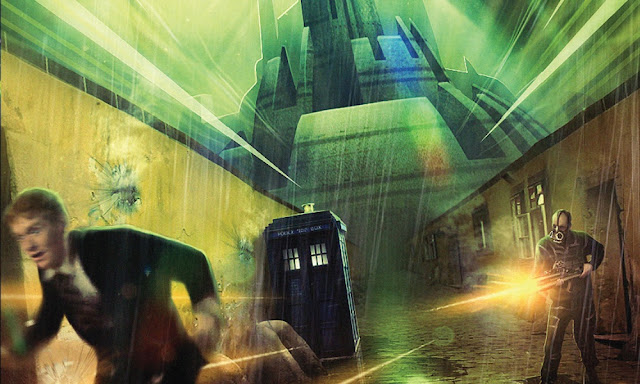 Prisoners of Fate has the difficult task of wrapping up the plot threads for this TARDIS crew that began in Cobwebs released in 2010 but the question is, does it do the whole Nyssa arc that began in the final story from Circular Time.

The answer is yes, it does.

Author Jonathan Morris probably didn't have an easy task writing this story and to the casual listener they certainly wouldn't have had an easy job of following what was going on but does Morris let this slow him down? No he doesn't.

The story begins with an odd moment where we are told that the TARDIS has been forced down but we don't hear it happen which results in the audience feeling like they have missed something. Maybe this was developed more in the script but cut down due to time constraints I don't know but it was probably something we needed to get us into the story a little easier. The TARDIS lands on a colony planet 25 years after the events in Cobwebs and Nyssa's son Adric is currently on the planet trying to find a cure for the disease that Nyssa formalted a cure for earlier in their travels but things are further complicated by Nyssa looking younger than Adric remembers thanks to events in The Emerald Tiger leading Adric to think she is his mother from before she gave birth to him and Nyssa can't let the Doctor know she has children thanks to events in Circular Time.

There is a hell of a lot of temporal shenanigans that are going on but we get a great antagonist, one that no one will see coming but given that this story was released in the anniversary year of 2013, it seems entirely appropriate. I love the concept of the antagonist if I wasn't entirely invested in the execution of the character but the Doctor has a personal connection to the antagonist and no, it isn't the Master. You'll have to listen to the story to find out!
The baddie isn't something that has ever been used in the show's history before and Morris pulls it off beautifully.

I can sometimes get annoyed with stories that place the course of history above the lives of our characters, the same way I get annoyed with the Prime Directive in Star Trek but this story makes you feel that not changing the course of history is far better than the possible alternatives by dramatizing what happens when you do change history. Perhaps the strength of the story is that it turns real paradoxes into personal decisions for the Doctor and Nyssa and the consequences of those decisions results in things that are great to listen to.

Something that struck me while listening to this trilogy of adventures is that each story gives each companion centre role. Eldrad Must Die! was Turlough's story, The Lady of Merica was Tegan's story and Prisoners of Fate is undoubtedly Nyssa's story.

As always, Sarah Sutton continues to impress as Nyssa and gives us a knockout performance here. Though I loved her on television, Big Finish has given her more room to expand and to shine often placing her at the forefront of stories where she deserves to be. Sutton succeeds in giving us a range of emotions that show us just how painful Nyssa finds it to be around her son 25 years after she re-joined the TARDIS. And we get a hilarious moment where Nyssa has to impersonate a prison guard in a way that only Nyssa could. Big Finish has got this team down to a tee.

Credit also has to be given to Alistair Mackenzie who plays Nyssa's son Adric. It is pointed out in the extras that he was perfect to play the role and it is true, the pair are so great they sound exactly like mother and son and their scenes together give the story more emotional heft. It is a shame that in the style of Terminus and The Five Doctors, that Tegan and Turlough are sidelined but that's okay considering their bigger roles in the previous two stories and what scenes they do have are as enjoyable as ever to listen too!

Prisoners of Fate is by no means a perfect story and it sometimes feels the strain of the various elements that had to be included and it can sometimes accidently lose the listener but it always manages to pick itself back up and delivers a good story which runs high with emotion and ultimately delivers. The story has a huge emotional fallout which is then satisfactorily dealt with in Mistfall, Equilibrium and The Entropy Plague.