Doctor Who: Planet of Giants Review 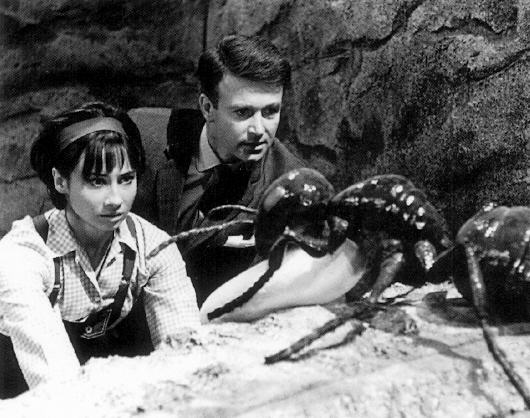 It is right that the second season of Doctor Who had a lot to live up after the runaway success of the first. This makes it odd that the production team decided to settle on a story like Planet of Giants to kick off the second year of Doctor Who. The main hook of the story is the shrinking of the series regulars, the Doctor, Ian, Barbara and Susan to the size of ants. While nowadays the concept of shrinking people is nothing new in film and television but in 1964, this was a brand new idea and despite some few dodgy effects but it was the 60s, they manage to pull it off in a pleasing enough manner.

In fact the whole thing works quite well. That's thanks to the great set design and what I particularly like is when the characters are trying to find out where they are and what looks like an alien planet turns out to be the cracks in a garden path. So yes, the sets from Raymond Cusick are very effective and the giant insects, the ant and the fly are surprisingly effective and gross, just like insects are in real life!
However the giant moggy at the end of part one is slightly dodgy and looks like something from a Disney film but, if you squint slightly, it doesn't look too bad.

With great effects and a strong concept it is a shame that the story is let down by the story. For a series opener we could have had aliens landing on earth but we get is someone who looks like a dodgy car salesman shuffling about his home trying to sell his pesticide DN6.
The strongest part of the storyline is that the reason why the regulars are shrunk is at least plausible and explained well through the acting of the actors. Its a shame that the rest of the story is so slow that it could be outpaced by a snail.

This is a shame as there is such a lot of potential in this story. Not only with its good visual effects but the acting is very convincing, especially from Jacqueline Hill who gets an awful lot to do in this and manages to keep the audience invested in the story throughout. This and the sets is what makes this story more enjoyable.

This story marked the first appearance of director Douglas Camfield who would go on to direct some of the most loved stories so it is a shame that, while he does a good job with what he is given, it is a shame that he was lumbered with this story.

Another first for the series is that it marks the first time Dudley Simpson is used for the incidental music. Dudley does a good job in this one and like the director went on to score music for some of the best remembered and most loved stories from the first 25 years of the shows history.

Overall, Planet of Giants is a good story that relies more on the visuals and acting than the actual story but with a strong concept that would go on to become one of the mainstays of science fiction, Planet of Giants might not be great but it is well worth a watch!