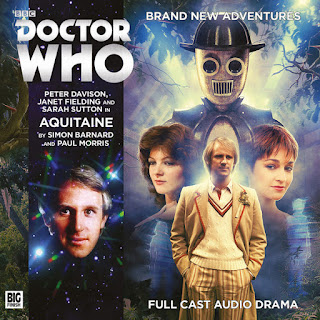 From the moment the story starts with Hargreaves's monologue there is a feeling of unease and the rest of the story manages to carry this sense of unease throughout without dropping the ball. Simon Barnard and Paul Morris's setting of a creaking spaceship gives us the perfect setting for a horror story and the sound design adds to the tension. Hargreaves's too twee voice is distinctly sinister with it obviously supposed to wrong foot the listener within the opening scenes.

Barnard and Morris give the audience a story that has been constructed with a sophisticated plot full of time travel, a deserted spaceship and creepy but good robots. The story keeps the listener on edge throughout the entirety of the play as we wonder how the Doctor, Tegan and Nyssa will be able to get out of the timey-wimeyness that is the spaceship Aquitaine. I felt that in some ways this story had some similarities to the recent Under the Lake/Before the Flood adventures starring Peter Capaldi. But where those stories relied on their visuals to terrify us, Aquitaine relies on the sound design with the rustling of leaves, sounds of shifting machines which take on a whole new life of their own when the TARDIS team arrives on the ship and come across the other 'inhabitants'.

The cast perform the material they are given excellently. Peter Davison continues to excel at recreating his role of the Fifth Doctor and brings him to life once more filling him with youthful enthusiasm. The scenes between Davison, Janet Fielding, (Tegan) and Hargreaves with his subtle comedy being used a full hilt and Tegan's irritability when she is forced to listen to the Doctor's discussion about tea is one of the highlights of this story! Davison also gets to show off his dramatic side when he delivers the end monologue to episode 3 which demonstrates the lengths the Doctor will go too when he pushed to his very limits and Davison pulls it off splendidly.

But Hargreaves is the star of this show with actor Matthew Cottle clearly enjoying his role and it is obvious that Barnard and Morris have put a lot of time and effort into this character and it has clearly paid off.

Overall, Aquitaine is a creepy, Hammer House of Horror type of adventure which never, ever loses it's sense of humour. And it is the fine balance of horror and hilarity that gives us one of the best Big Finish stories to add to your audiobook collection!