Next Month From Big Finish - Doctor Who March 2016 releases. 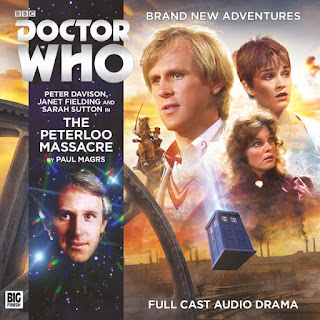 "They say there’ll be thousands pouring into Manchester tomorrow. From all over the county, north and south. It’ll be a piece of history. People will remember this!"

Lost in the smog of the Industrial Revolution, the TARDIS crashes four miles south of Manchester, in the grounds of Hurley Hall – a grand mansion belonging to a local factory owner, a proudly self-made man. But while Hurley dreams of growing richer still on the wealth of secret knowledge locked up in the Doctor’s time and space machine, his servants hope only for a fair day’s pay for a fair day’s work. His young maid Cathy, for instance, whom Nyssa learns is looking forward to joining the working people’s march to St Peter’s Field, in the heart of the city. There’ll be speeches and banners and music. It’ll be like one big jamboree…

Or so she thinks. For the city’s establishment have called in their own private militia, to control the crowd. One of the darkest days in Manchester’s history is about to unfold – and the Doctor, Nyssa and Tegan are right in the thick of it. 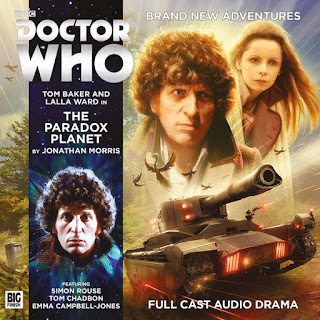 Whilst travelling in the vortex, the TARDIS is struck by an advanced war machine - a Time Tank! Losing Romana, the Doctor and K9 pursue the Tank to Aoris, a world quite literally at war with itself.

Soldiers from the future are attacking the past of their own planet - gathering resources and stealing endangered species. But the past is not without weapons of its own - leaving deadly devices ready to trigger many years ahead after their enemies have been born.

Trapped at opposite ends of a temporal war, the Time Lords have two time zones to save. But who is in the right, and who in the wrong? And when history itself is against you, can anybody actually win? 2.1 Beachhead by Nicholas Briggs
The residents of Stegmoor Bay have more to deal with than the elements when a flash flood uncovers the remains of a Voord scout ship.

2.2 Scenes from Her Life by John Dorney
Following a clue into the time vortex, the Doctor investigates a desolate city only to discover a horrifying plot to create a monster.

2.3 The Gift by Marc Platt
San Francisco, 1906, and a desperate race to prevent the destruction of more than just the city.

2.4 The Sonomancer by Matt Fitton
River Song tries to stop a mining company from exploiting the Syran people only to discover the miners have uncovered much more than they bargained for. 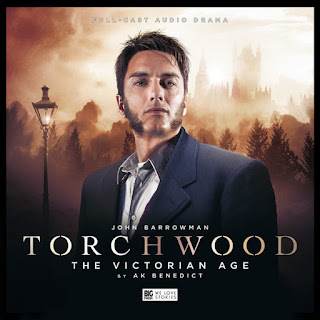 London, England, the 1890s. Queen Victoria, ruler of Great Britain and Ireland and Empress of India, has arrived for her annual inspection of the Torchwood Institute. This year, everyone is quite determined, nothing will go wrong.

Several minutes later a terrible creature is unleashed on the streets of London. No one knows where it comes from, what it is, or even why it's on Earth. It's ruthless, has no morals, and is quite unstoppable. Captain Jack Harkness is on the loose, and Queen Victoria is along for the ride of her life.