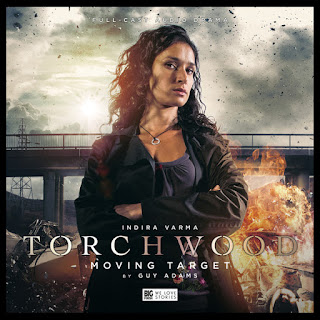 This summer, the hunt is on – and Indira Varma is ready!

'We still can't believe Indira said yes – but she did, and she's been utterly delightful,' enthuses producer James Goss. 'We were dying to bring back Suzie as soon as we started – she's such an interesting character, and giving her a solo adventure provides us with a chance to explore what makes her tick. Amazingly, this is a story where she's the hero. Or the nearest thing to it.'
Introduced in Torchwood's opening episode Everything Changes, Suzie was Jack Harkness' original deputy in Torchwood Three – until her true nature was revealed.

Suzie returns in Torchwood: Moving Target by Guy Adams. Set a year before her death, the story explores her bleak outlook on life – while pitting her against hunters from beyond the stars.

One morning, Cardiff just stops. The rain hangs in the sky, the traffic doesn’t move on its streets, the people are frozen like photographs.
Alien eyes have set their sights on our world and won’t leave until they’ve blood on their hands.
The Hub is in lockdown, only one member of the team free to move.
It’s time for Suzie Costello to save the world.

Also appearing in the story are Naomi McDonald as Alex and Nicholas Burns as the Referee.
Suzie's return will come a month after Tom Price takes on a starring role in Torchwood: Ghost Mission once again portraying Sergeant Andy.

'We brought Tom back for a little cameo in Series 1, and just couldn't resist the chance to bring him back properly,' says James. 'Tom Price is lovely, and threw himself into an adventure all of his own. He made an instant double act with Samuel Barnett, playing the enigmatic Norton Folgate, a Torchwood agent with his own agenda.'
Audio Big Finish Miscellaneous News Torchwood